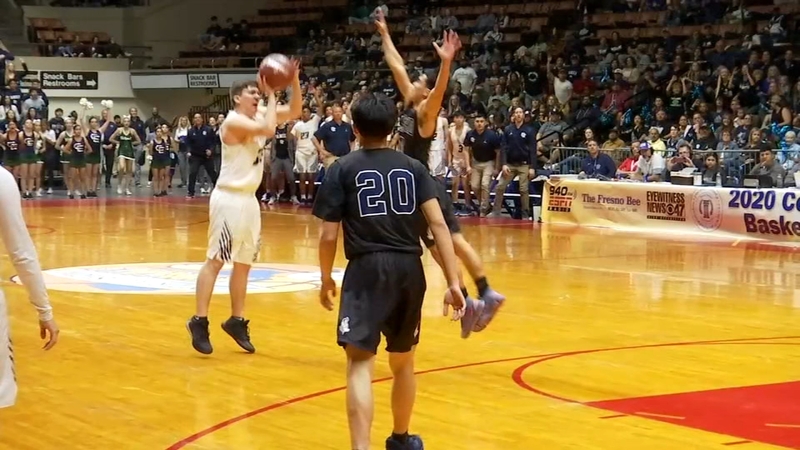 Long-range shooting has trickled down to the high school scene here in the Valley and has become a 'game changer.'

🔥🔥 Cole Anderson went absolutely nuclear in about a 5 minute stretch! 🔥🔥@ClovisWestBask1 beats Modesto Christian 91-65 behind 34 points for @Cole3Anderson.
The @ClovisWest junior has one of the purest shots I’ve ever seen! 🌧️ @ABC30 pic.twitter.com/dU9MixATX9

One of the best shooters in the Central Valley is using the three-pointer to rewrite the record book.

"Shooters obviously work on their shots so much so it's just good to see it going in in the game which is what you work for when you're doing your workouts," said Clovis West senior Cole Anderson.

The UC Santa Barbara commit, who already holds the all time points record at CW, set the school record in a game with 51 points thanks to a third quarter where he was a perfect 9-9 from long range.

"I didn't even know I didn't miss until the end either so it was crazy and I didn't really know what was going on until after," Anderson said.

Anderson didn't even play the fourth quarter, and incredibly on the same day, another school record toppled before the fourth.

"As soon as he sits down my assistant coach tells me coach you know he had 49?" said Hoover head coach Tezale Archie. "I said I wish you guys would've told me that sooner I would've left him in there for the 50."

Over at Hoover HS, Long Beach State commit A.J. George set the school record with 49 points. Tom Laub, the previous record holder at 47 points, set it before the existence of the three point line. "It was an honor for him to bring me the ball because it shows that he really cares about passing the torch down," George said.

Historic Moment: Tom Laub attended last night match vs. Roosevelt to pass the torch to @AjGeorge14 who now holds the scoring record for most points in a game for @hooverhoops559 (49 points)

But it's not just the boys shooting threes.

Caruthers Morgan Trigueiro is on pace to set the school three-point record as just a sophomore. At Clovis, another sophomore splashing from deep. This season, the Cougars Devin Miller hit nine threes in a game, finishing with 37 points.

"We had told her last year - pay attention to what's going on because we're going to put you in a much bigger role and she's handled that really well," said her head coach Greg Clark.