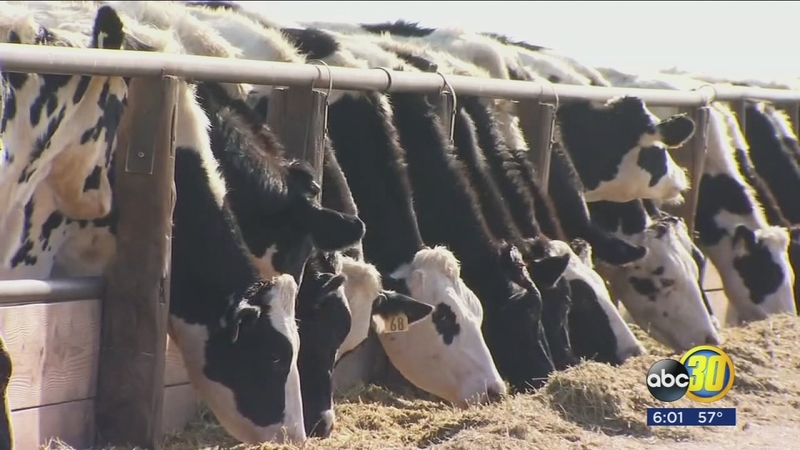 However, Areias says torrential rain put his livestock in danger and he needed to drain the water fast.

The state claims Areais dumped more than 300 thousand gallons of cow waste from his dairy farm across the road, into this ditch that they say ultimately deposits water into the San Joaquin River.

He is admitting to the crime but says he is not guilty because he was left without any other options.

The ditch near the dairy farm now sits empty but the state department claims just a few months ago, it was full of cow wastewater that local dairy farmer, Dennis Areias, and another employee were illegally dumping.

Areais, a Los Banos school board member, pleaded not guilty to the charge.

Areias said, "There was never a chance of this water getting to any waterways, absolutely zero."

The reports claim a warden with the state department of fish and game noticed a hose moving cow waste near Box Car and Henry Miller Road.

When he located the ditch, it states the water was dark brown, smelled like cow waste, and had a thick consistency and after testing, the department found the water had toxic levels of ammonia to where it could harm fish populations.

When they contacted Areais, they say he knew it was illegal, and that he used a six-inch hose to pump at night so "no one would see."

But Areais says the report does not tell the whole story.

"My animals were getting sick, and traffic was a big problem on Henry Miller Road, and it was a six-inch hose I needed to pull back every time a car came by," Areias said.

Areais says torrential rain that month was putting his livestock in danger, the water was too deep to get them out, and he needed to make decisions fast.

He says he contacted the San Luis Canal Company, and the landlord of the property containing the ditch with some provisions, he says he got permission to pump the water.

"I contacted the landowner, to see if it would be okay, even though I know it's not legal," Areias said.

Areias says after he got the cows out, he immediately pumped the water back out of the ditch.

"It was either let them sit in the corral and let them die in front of me...or do the best I can to take care of them...and letting them die was never an option."

He says he has spent a lot of money modifying the corrals and widening the ditches to ensure this doesn't happen again but his one-time mistake is one he will have to deal with for a while longer.

This is not the first time a Los Banos school board member has gotten in trouble with the law. If you recall, Tommy Jones was charged last year with bribing a trustee.

Areias told me he was insulted being mentioned in the same context because he admitted to illegally dumping the water.