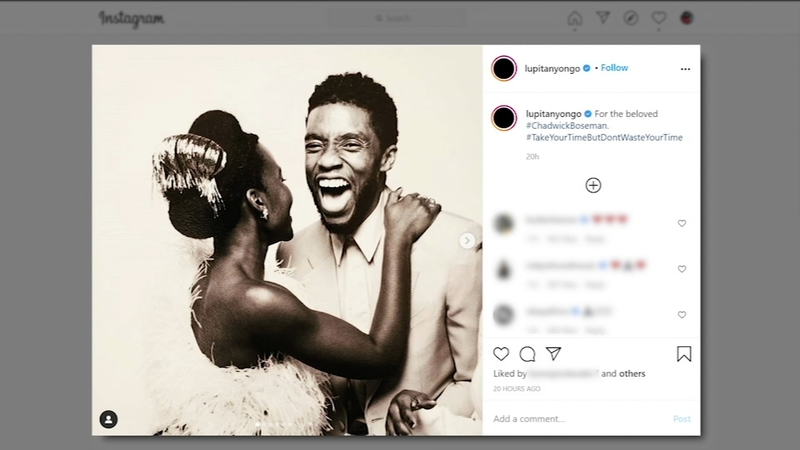 Lupita Nyong'o has written a stirring tribute to her late "Black Panther" co-star Chadwick Boseman, calling him a man whose power will "reverberate for generations."

"I write these words from a place of hopelessness, to honor a man who had great hope," the actress writes in the message posted to her social media accounts Tuesday, 11 days after Boseman's death from colon cancer at age 43. "The news of his passing is a punch to my gut every morning."

Nyong'o, who played Nakia opposite Boseman's T'Challa in the blockbuster 2018 film, says she was struck by his "quiet, powerful presence" and an energy that seemed immortal which manifested itself through his carefully chosen words.

"He used his mouth to build, to edify, never to break," she writes. "And he used it to tell some regrettably lame dad jokes."

She says Boseman "cared so much about humanity, about Black people, about his people" and that "his power lives on and will reverberate for generations to come."

"He made great art. Day after day, year after year," Coogler said in a statement. "That was who he was. He was an epic firework display."

Jordan wrote directly to Boseman, saying, "Everything you've given the world ... the legends and heroes that you've shown us we are ... will live on forever. But the thing that hurts the most is that I now understand how much of a legend and hero YOU are."
Report a correction or typo
Related topics:
arts & entertainmentmoviesmoviedisneycelebrity deathsmarvelblack panthercancer
Copyright © 2022 KFSN-TV. All Rights Reserved.
TOP STORIES
Le Grand woman charged with 3 counts of murder for deaths of children
Man shot and killed in central Fresno, police say
4 families displaced after apartment fire in NE Fresno
New details emerge in killing of mother and grandfather in SE Fresno
DA to pursue death penalty against 3 accused in Fresno mass shooting
2 NYPD officers shot, 1 fatally, responding to domestic violence call
Health officials credit vaccine for low COVID rates at nursing homes
Show More
Ag leaders working to protect Valley farmworkers during Omicron surge
1 killed, 3 injured in crash on Highway 41 in Fresno County
UC Merced to bring back students in stages for in-person learning
CA proposal would let older kids get vaccines without parents' consent
144th Fighter Wing gets glimpse into future with 'robot dog'
More TOP STORIES News