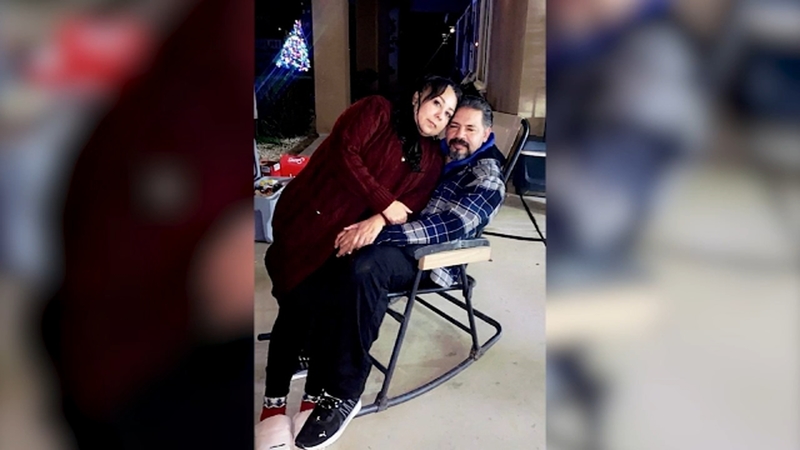 MADERA COUNTY, Calif. (KFSN) -- Dozens of Patricia Vargas' family members stood at the corner of Avenue 17 and Road 27 Friday night in anguish. It's where the life of the beloved mother of five and grandmother of four came to an end.

The CHP says it was around 6 Wednesday night when 33-year-old Miguel Hernandez was driving drunk in a Chrysler on Road 27 in Madera County.

He quickly turned left onto Avenue 17 right in front of Patricia, who was at the wheel of a Nissan with her husband and daughter, headed down Avenue 17. She swerved to avoid hitting the Chrysler and into oncoming traffic -- hitting a truck head-on.

"They were just going to go to the market and grab bread for sandwiches," said her sister-in-law, Emily Vargas. "And she never made it back."

Patricia died at the scene. Her husband, Ted and 11-year-old daughter were rushed to the hospital. Their daughter will be at Community Regional Medical Center for at least a couple more weeks as doctors treat the fractures to her face, wounds on her legs, broken ribs and possibly punctured lung.

"It's senseless and at the same time, just frustrating," said Emily.

Hernandez was booked into jail on multiple charges, including a DUI with three priors and murder. Family members are hoping he receives the maximum punishment.

"Why would he be released to do this again to another family," asked Emily.

The family wants to see changes made to the intersection where the crash happened. They say people who live in Madera County near Avenue 17 and Road 27 have already approached them to say they feel the same.

"No lighting. No proper stop sign," said Patricia's sister-in-law. "How many more people have to die on this road for something to be done?"

Patricia and her husband were married for 26 years and had just welcomed a new grandchild.

"She just had her fourth granddaughter two weeks ago," said Emily, "Thankfully, she was able to see her. Before she was taken from us."

As Patricia's husband and daughter begin to heal physically, the entire family is bracing for the long journey of emotional healing. Their message to people on the road is simple.

"I just pray that her life is not taken in vain. I am hoping that people will consider before getting into a car whether you're impaired either drunk or drugs," said Emily.

The family has started a GoFundMe that will raise money for Patricia's funeral expenses and all of the medical expenses associated with her husband and daughter.