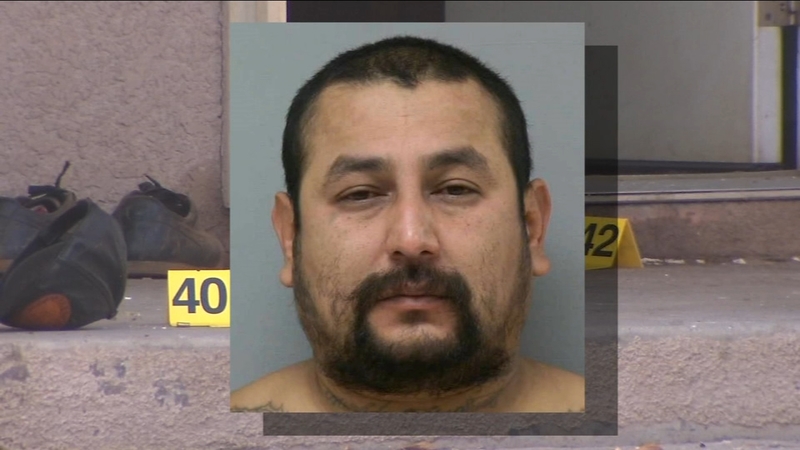 MADERA COUNTY, Calif. (KFSN) -- Evidence markers and bullet casings are scattered across scene hours after a Madera man was arrested for shooting a Sheriff's deputy in the leg.

"It was a scary incident for those involved. Even after the deputy was shot and evacuated from the area, he still outside firing scores of rounds," said Madera County Sheriff's Commander Tyson Pogue.

Deputies were originally called to the home of Luis Maravilla, 39, for a domestic disturbance call on Sunday night.

Sgt. Mike Pace was the first at the scene.

It was moments after he parked on Maravilla's driveway that shots went off.

"Almost immediately he encountered gunfire. Sgt. Pace was struck in the leg. He was treated and transported to a regional hospital and was released," said Commander Pogue.

Meanwhile, Maravilla barricaded himself inside the home, investigators say he was firing rounds from both inside and outside of the residence.

Neighbors we spoke with didn't want to be identified but say they heard gunfire after gunfire.

A SWAT team made up of Madera County deputies, along with Madera and Chowchilla officers arrived to help.

While investigating the scene on Monday morning, deputies say about 100 shots were fired, and several weapons were found at the home.

"During the investigation, we did find rifles and handguns stationed outside around the residence. We won't know if he intentionally put them there as a stash point so he could easily get to them, or if that happens to be where he set them down," said Commander Pogue.

Maravilla is facing several charges, including attempted murder of a peace officer, gross negligent discharge of a weapon, and criminal threats with an intent to terrorize.

Deputies still aren't sure if alcohol or drugs were a factor.

As far as the deputy, he's expected to make a full recovery.