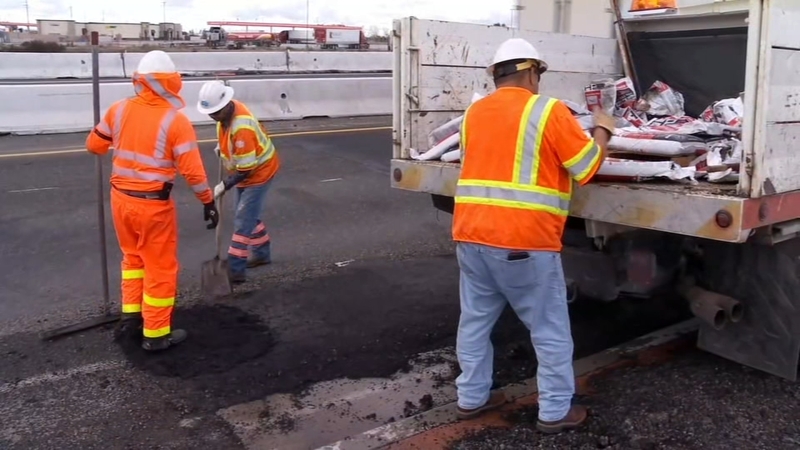 MADERA, Calif. (KFSN) -- Hours after the latest winter storm passed, drivers in the Madera area are still having to steer clear of some flooded areas.

Over the last couple of days, the CHP says, it's been more difficult to avoid flooding on Highway 99 through the construction zone just north of the city.

"The unevenness of the new concrete with the old asphalt has caused us problems from about Avenue 16 to Avenue 18," CHP Officer Gregorio Rodriguez says. "So Caltrans has done due diligence in doing (the) best they can to intermittently close the number one lanes and begin pumping the water out of that location."

Caltrans crews also closed the number two lane of Highway 99 at times on Friday morning to patch up perilous potholes south of the city, including one in the area of Avenue 12.

"With all that excess of water on the roads, if there's any cracks or any small potholes, that mixture just makes the potholes grow," Caltrans District 6 Public Information Officer Larry Johnson says. "And add that with the traffic, you know a lot of people travel that roadway each and every day, that just opens up the potholes even more."

Johnson says fixing the potholes as fast as possible was a priority.

They want the roads smooth to keep protect the public, and their vehicles.

"Issues with cars-tires, alignment, tires, rims, anything like that," Johnson says. "So obviously with the wear and tear of 99 and the weather, we wanted to take care of this quickly so there wouldn't be any other issues with drivers moving forward."

The CHP says if you see a pothole, try to center your car over it, but don't swerve trying to avoid it.

As far as construction zones go, take it slow.

Officers saw more than a few spin-outs and fender-benders during this last storm.