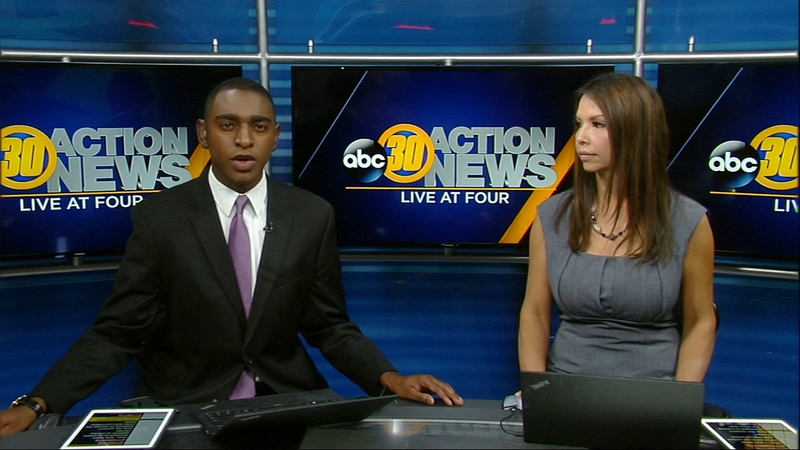 MADERA, Calif. (KFSN) -- Police have arrested a man who they say set a fire to the front yard of a home early this morning.

But the crime was all caught on surveillance video.

Officers say the suspect returned to the scene moments after he set the fire and neighbors said he was taking pictures of the flames.

He was arrested and investigators say there may have been a reason behind his odd behavior.

Leafless black charred shrubs on the corner house show the damage to a front yard on Monterey and Gary in Madera. The people who live here got out safely and with the help of many nearby neighbors grabbed garden hoses and buckets of water to put out the flames.

A suspected arson is in custody for starting a fire at the front yard of a Madera home.

"My son said, dad, dad, get up. The neighbor's house is burning, come on out. So ok, I got outside, all of my family go outside," said Madera Resident Angel Aguilera.

Madera Police was told the victim's home was armed with security cameras. So they took a look at the footage.

"Upon watching that video, they got a suspect description of what the male subject was wearing. As CDF was putting out the fire they saw the same subject returning to the scene matching the description so they made contact with him," said Madera Police Department Chris Anaya.

While they were putting out the flames, that at one point ignited a huge tree, neighbors noticed a man that no one recognized start taking pictures of the fire.

They said it was the suspect, Harman Singh who was later arrested for the crime.

Investigators do not know why the suspected arsonist chose that particular house to start the fire.

The video, that's now been booked as evidence shows a man using what appears to be lighter to spark it.

Officers did interview Singh briefly at the scene.

His reaction was that he denied lighting the fire in the first place. Denied any involvement in the fire. He could be looking at arson charges, vandalism charges as well.