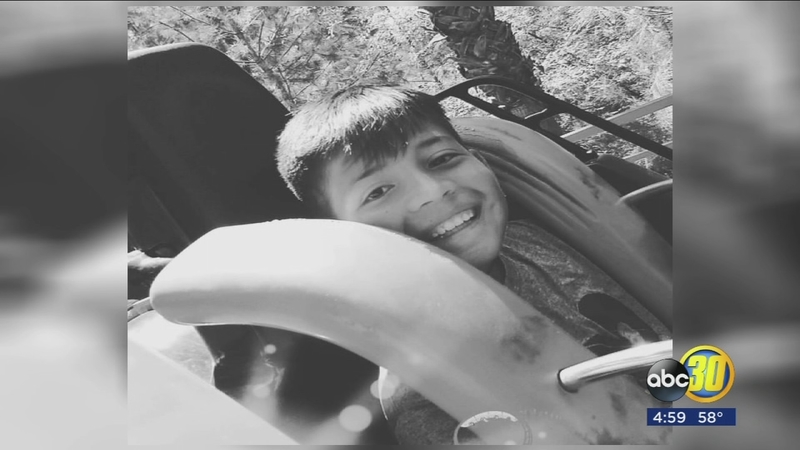 MADERA, Calif. (KFSN) -- Luis 'Tito' Lopez died Saturday when a pickup truck veered way off the road and crashed into his bedroom.
RELATED:A truck slams into a familiy's home killing an eleven-year-old in Madera

Paramedics rushed his 9-year-old brother to the hospital after the crash. He's out now, but their sister was also in the room at the time and she had to go to the hospital Monday.

A blue tarp covers the converted garage where Tito was lying in his bunk bed as a pickup truck barreled through the wall, pushing a 200-gallon gas tank with it.

"The first problem at hand was that there was propane, a lot of propane, leaking into the house," said Vince Guthrie of Valley Propane.

Guthrie came out right away, helping firefighters get the destroyed tank away from the house. He came back Monday to lend a hand again.

"I was able to get them a 23-gallon (propane) tank because the nights are getting colder all of a sudden," he said.

Tito's family lives on the road named after his uncle, Raul Moncada, an army sergeant killed by an IED in Iraq in 2009.

In fact, the family was gathering Saturday to mark his birthday but instead came to mourn another loss. They also lost Raul, Sr., in a train crash in 2014.

They are not mourning alone.

"I think the biggest story is what our community has done over the last three days to support this family," said school superintendent Andrew Alvarado. "It's been unbelievable, the outreach."

Friends and strangers delivered food to the house, and they have donated more than $18,000 to a GoFundMe account.

They have also reached out to help the driver's family. A witness says it looked like Thomas Canton had a seizure just before the crash.

Friends said the 36-year-old loved trucks, his quad and the outdoors.

He had a 16-year-old daughter, who's also in the thoughts and prayers of Madera Ranchos neighbors, like the one visiting B&D Holiday Center to pick out gifts for the children left behind.

"Tremendous turnout yesterday," said B&D's Bob Hill of the gift drive with toys for the children listed on cards and placed on a Christmas tree. "There were probably close to 25 to 30 of them and there are only four or five left."

We talked to some of Tito's family members who said he was a straight-A student and a gifted soccer player.

His bedroom will get a complete remodel, with Home Depot donating the supplies and local contractors volunteering to do the work.

Fundraiser for the Lopez/Moncada family