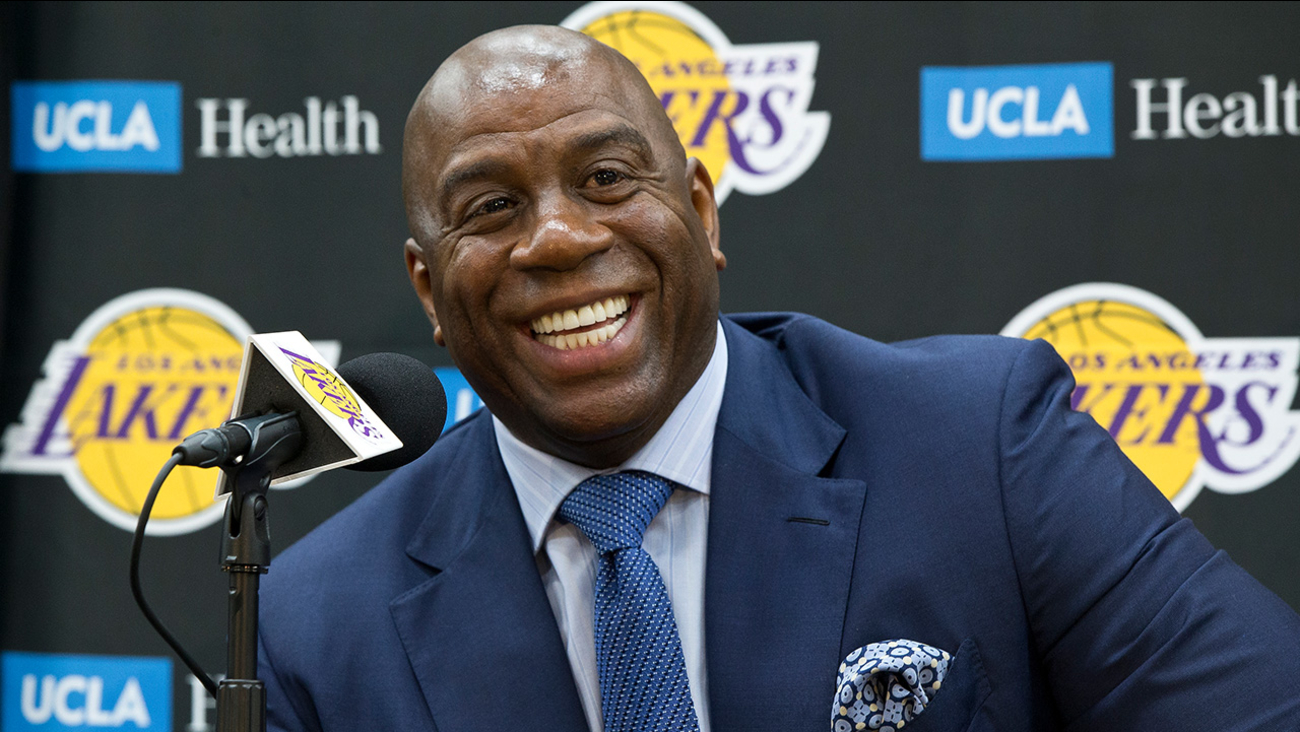 Magic Johnson announced Tuesday night that he is stepping down as the Los Angeles Lakers' president of basketball operations.

Johnson made the announcement at an impromptu news conference held before the Lakers' season finale against the Portland Trail Blazersin Los Angeles.

"I had more fun on the other side than on this side because now, tomorrow, I would have to affect someone's livelihood and life," said Johnson, who took the Lakers job in February 2017, after the team fired Mitch Kupchak as general manager and removed Jim Buss as executive vice president of basketball operations. "I thought about that and said that's not fun for me. That's not who I am.

Johnson, 59, said his decision to step down was not over head coach Luke Walton's job status. He said he had not told Jeanie Buss, the team's controlling owner and president, or general manager Rob Pelinka of his decision.

"I knew I couldn't be face-to-face and tell her," he said of Buss, saying he loves her like a sister. "I couldn't stand to tell her."

Johnson and Pelinka visited with Lakers star LeBron James and his agent, Rich Paul, on Saturday, league sources told ESPN's Adrian Wojnarowski. Johnson offered no indication that he was on the brink of leaving the team, sources said.

Asked if he would like to see Pelinka and Walton retain their jobs, Johnson declined to answer, saying that will be up to Jeanie Buss.

Johnson said his position with the Lakers didn't allow him to be a statesman of the game of basketball, and he wants to go back to his life away from the job.

"I was happier when I wasn't president (of the Lakers)," Johnson said.

He said he will return to community work and reaching out to players around the league to help in their development.

Johnson also said he is tired of being investigated or fined by the NBA for tampering when he comments on basketball on Twitter or even speaks to another organization's player.

Johnson, a longtime broadcaster and beloved basketball figure before moving into the front office, has been investigated four times for tampering after everything from a joking comment about Paul George on Jimmy Kimmel's talk show to his response to an email sent to him by Philadelphia's Ben Simmons.

"I thought about Dwyane Wade retiring (Wednesday), and I can't even tweet that out or be there,'' Johnson said. "Serena Williams called me a week ago and said, 'Will you mentor me and be on my advisory board?' And I said, 'Yeah, I'm going to do that.' So when Ben Simmons called and we went through the proper channels and they made me look like the bad guy out of that situation, but I didn't do anything wrong ... I was thinking about all those times, all those guys who want me to mentor them or be a part of their lives, and I can't even do that. I had more fun on the other side.''

Johnson mentioned other teams' irate responses to his perceived tampering as another factor in his desire to get back to his regular life. Johnson has many thriving business interests along with ownership stakes in the Los Angeles Dodgers and Los Angeles FC.

"Also what I didn't like is the backstabbing and the whispering," Johnson said, later clarifying that he didn't mean within the Lakers, but around the league.

"I don't like a lot of things that went on that didn't have to go on,'' Johnson said. "I hope that after (the season ends), the Lakers can head in the right direction, which we are. Injuries really hurt us, but I enjoyed working with Jeanie."