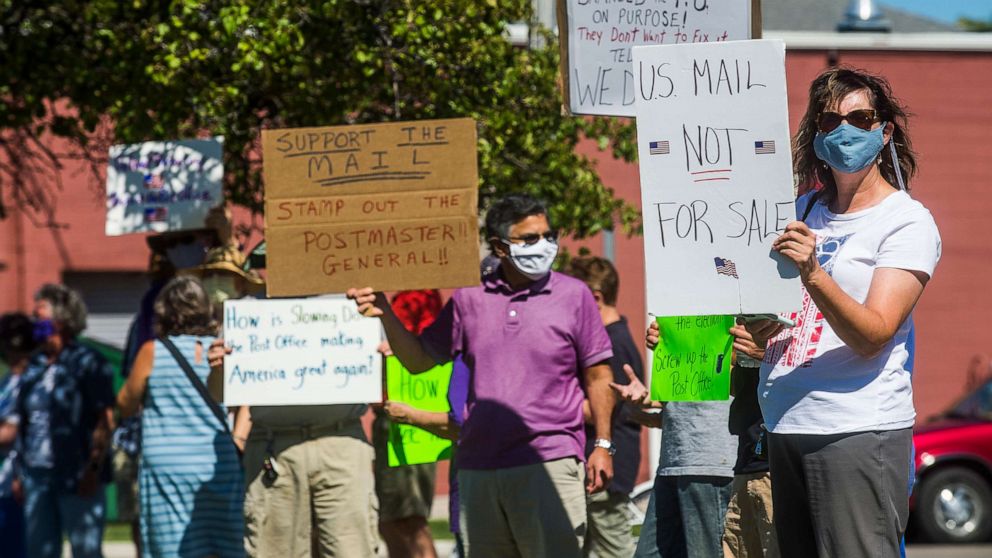 The United States Postal Service has warned election officials in 46 states and the District of Columbia that their absentee voting rules are "incongruous" with the agency's mail delivery service standards and may result in uncounted ballots, raising further alarms with the viability of a voting platform millions of Americans are expected to use in the run-up to the November vote.

In recent weeks, postal service General Counsel Thomas Marshall penned letters warning that states may be over-estimating the speed with which ballots will move through the mail. If the post office is not afforded a few extra days of leeway to deliver ballots to the election offices, Marshall warned that late-arriving ballots could leave some voters disenfranchised.

Only four states received a clean bill of health: Nevada, Rhode Island, New Mexico, and Oregon. Among those with laws that concern the postal service are several key swing states in the upcoming election.

In Pennsylvania, for example, the deadline to request an absentee ballot is one week before election day, and Michigan allows requests up until four days before. But in order for it to be counted in either state, under current laws, the ballot must be back in the mail and returned by 8 p.m. on Election Day. One week for two deliveries is not enough time, Marshall explained. He said it could realistically take more than a week for a piece of mail to be sent to the voter and then "returned by mail in time to be counted."

"Under our reading of your state's election laws ... certain state-law requirements and deadlines appear to be incompatible with the Postal Service's delivery standards and the recommended timeframe," Marshall wrote, according to one of the letters made public in a court filing Thursday.

"As a result," he continued, "to the extent that the mail is used to transmit ballots to and from voters, there is a significant risk that, at least in certain circumstances, ballots may be requested in a manner that is consistent with your election rules and returned promptly, and yet not be returned in time to be counted."

Applications and ballots in Pennsylvania may still be delivered to a voter's county election office in person by the specified deadlines.

Marshall's letter to Pennsylvania was made public in a court document filed late Thursday as part of a lawsuit brought by progressive organizations in April. In the filing, Secretary of State Kathy Boockvar, Pennsylvania's chief election official, encouraged the state's supreme court to allow absentee ballots received after Election Day to be counted as valid - yet another sign that Americans may have to wait days to learn the winner of the upcoming presidential vote.

Marshall notes in his letters that the postal service issued this same warning to states in May, at which time the agency suggested that election leaders re-examine their absentee voting rules to account for mail delivery standards of service, which are two to five days for First-Class Mail and three to 10 days for Marketing Mail.

But in their filing Thursday to the Supreme Court, lawyers representing Boockvar argue that in its July 29 letter, "The Postal Service's announcement represents a significant change to the outlook for voting by mail in the general election" - a reference to possible delays in mail service.

As such, to avoid the "statewide risk of disenfranchisement for significant numbers of voters utilizing mail-in ballots," lawyers writing on Boockvar's behalf asked the court to "order that ballots mailed by voters on or before 8 p.m. on Election Day will be counted if they are otherwise valid and received by the county boards of election on or before the third day following the election."

Despite what would appear to ensure a delay in announcing a winner in the state, lawyers for Boockvar add that they "do not expect that such an extension would create any significant delay in the reporting of Pennsylvania's election results."

The late-in-the-game legal jockeying in Pennsylvania comes amid increased scrutiny of the postal service, which has come under fire in recent weeks after its new postmaster general, the longtime Republican financier Louis Dejoy, enacted a series of procedural reforms that critics say will cause delays in mail service.

Those reforms have coincided with a deluge of unfounded attacks on the validity of mail-in voting from President Donald Trump, exacerbating fears that DeJoy's changes to mail delivery could serve political means of undermining the absentee vote. The postal service and the White House have repeatedly denied those accusations.

For their part, Democrats welcomed the absentee voting extension request in Pennsylvania. Late Thursday, in an email to supporters, Marc Elias, a lawyer who represents progressive groups who brought the lawsuit, lauded the decision as "GREAT news."

"Thanks to our lawsuit and this concession, millions of Pennsylvania voters -- many of whom will cast their ballot by mail for the first time -- now won't have to worry about their ballot not counting due to mail delays," Elias wrote.

In a brief interview with ABC News, Elias said Thursday he was "very concerned" about the latest warnings from the postal service. "It's why we continue to litigate... around the country," he added.

Election experts note that voters are empowered to avoid having their ballot rejected by requesting and re-submitting their ballots early in the process - not waiting for the deadline.

"The Postal Service recommends you mail your ballot back at least one week before the deadline before election day. And we know that almost half the states allow you to request a ballot after that time," said Tammy Patrick of the nonpartisan Democracy Fund.

"In fact, there's seven states that allow you to request it on Monday for Tuesday's election," she continued. "And that's just not practical. Just because you can wait until a deadline, doesn't mean you should."