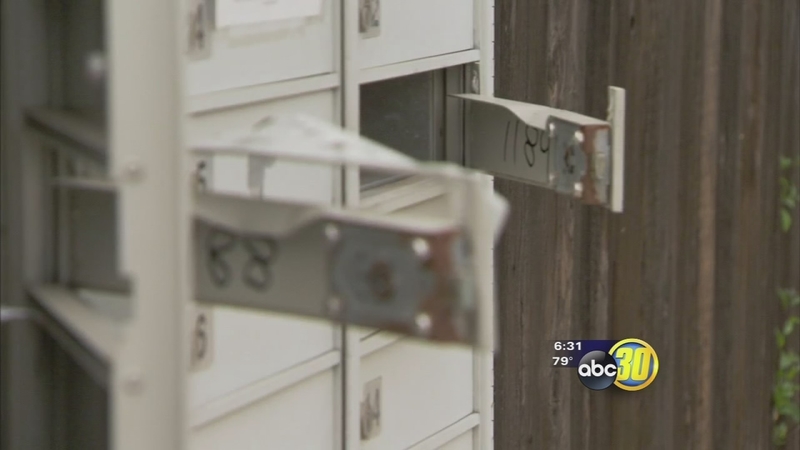 CLOVIS, Calif. (KFSN) -- Dozens of Clovis families said they're in fear of identity theft after thieves stole mail in an entire neighborhood. The latest rash of mail theft happened Tuesday according to neighbors near Shaw and Temperance.

On Tuesday Tim Brown said his family and 140 of their neighbors were hit. The shadowy figure caught on surveillance down the street is one clue investigators have.

This theft for the Browns though, was just the beginning of their problems.

"Now we have to go down to the post office and wait in a long line for 30-minutes to get our mail," said Jen Brown, mail theft victim.

Every day they join dozens of others who are waiting for their new mailbox. At the beginning of that long line-- Steffanie Hartman. She said their mail theft happened back in January.

"It was right around tax season when everybody was getting their forms in the mail, and I know our CPA sent stuff too and it's gone."

And Hartman said the post office doesn't know when it'll get fixed.

"They told me that they have people driving down from Auberry who were in a similar situation."

We tried to get an answer from the United States Postal Service but a postal inspector said it's a maintenance issue. They told Action News they're looking into the problem but don't know when those boxes will get replaced.

If you have been a victim of this crime contact the post office at 877-876-2455 for USPS 24 hour service so they can have it on record.
Related topics:
clovisclovistheftfresno countyidentity theftusps
Copyright © 2021 KFSN-TV. All Rights Reserved.
FRESNO COUNTY
Fresno Co. man accused of stabbing his mother, killing her boyfriend
Fresno County appoints interim director of Dept. of Social Services
COVID at jail clogging court system in Fresno County
CA governor recall poll: 2 new voting centers open in Fresno County
TOP STORIES
Man shot multiple times at party in southwest Fresno
Cyber Monday 2021 deals shopping guide
Fauci says omicron variant will 'inevitably' arrive in US
Valley health officials bracing for arrival of new COVID-19 variant
Fresno police share tips for protecting your packages
Pedestrian hit and killed in Clovis
Is it ever too early to put up a Christmas tree?
Show More
Fresno Co. man accused of stabbing his mother, killing her boyfriend
Fresno State student killed in early morning crash on highway
Boy life-flighted after being shot in Tulare County, deputies say
1 killed, 1 hospitalized after stabbing in Auberry, deputies say
What is omicron? What to know about new COVID variant
More TOP STORIES News