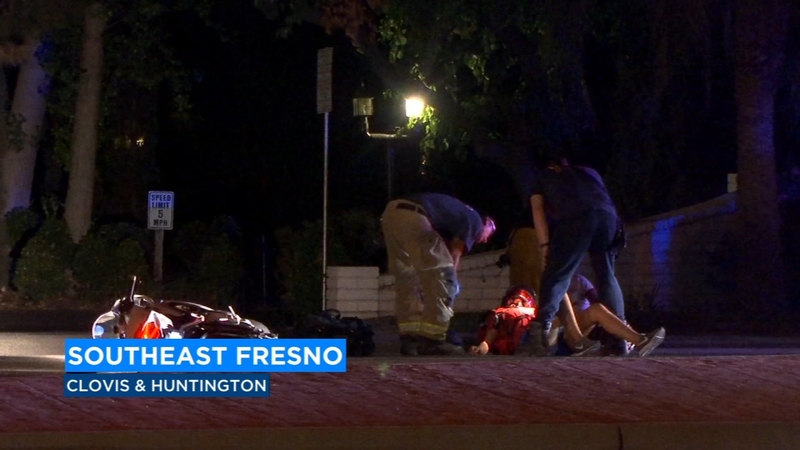 FRESNO, Calif. (KFSN) -- Traffic on Clovis Avenue is flowing once again after it was temporarily shut down near Huntington for two separate injury crashes.

The first happened around nine Thursday night. Police said a man was trying to cross six lanes of traffic outside the crosswalk and that's when he was hit by a car. The driver told police it was hard to see the man because it was so dark.

The man was taken to Community Regional Medical Center and is listed in serious condition. No word if the driver was cited for the incident.

That's when the rider ended up swerving to avoid hitting a car, and ended up crashing into a police patrol car that was blocking part of the road.

Lt. Jennifer Horsford with the Fresno Police said, "Whether you're approaching a scene where officers are blocking lanes, or construction sites-- when the lanes start to merge down, you need to pay attention to the other vehicles around you, especially when you're trying to condense three lanes into one lane."

The motorcycle rider suffered a few abrasions and was treated at the scene. A woman who was riding as his passenger was taken by ambulance to a nearby hospital. The extent of her injuries is not known.
Report a correction or typo
Related topics:
fresno southeastpedestrian struckpedestrian injuredfresno police departmenttraffic accident
Copyright © 2021 KFSN-TV. All Rights Reserved.
More Videos
From CNN Newsource affiliates
TOP STORIES