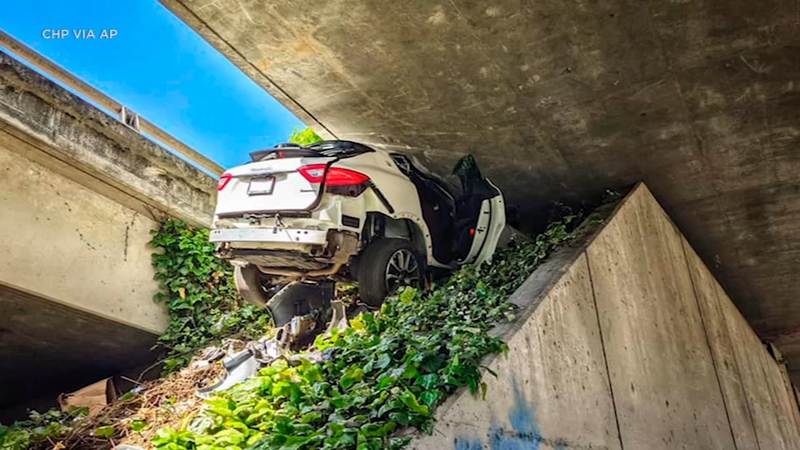 OAKLAND, Calif. -- A man fleeing the California Highway Patrol totaled his girlfriend's Maserati after he careened up an embankment and slammed into the underside of an overpass, wedging the SUV under a freeway in Oakland, authorities said Tuesday.

"The driver is lucky to be alive. The owner of the Maserati ... not so lucky," the CHP said in a social media post that included photos of the mangled luxury vehicle.

Police say the suspect, identified as 32-year-old David Gardner, was driving 90 mph in a Maserati Levante SUV on the I-580 in the Oakland area Monday.

A CHP officer tried to pull over the vehicle for speeding but he accelerated to over 100 mph and exited at West Street.

At that point, the Maserati veered over a curve and left the roadway, flying up the embankment and ending up wedged under the freeway, said CHP spokesman Officer David Arias.

The SUV belonged to Gardner's girlfriend but he was alone in the vehicle at the time. He complained of pain and was taken to a hospital.

"It was a miracle he didn't get more injuries because the whole area where his head would have been caved in. He must have ducked or something," Arias said.