Police say 27-year-old Ivan Cuevas charged police with a knife. They say the officer tried to talk him down, but eventually shot the suspect several times.
KFSN
By Brian Johnson 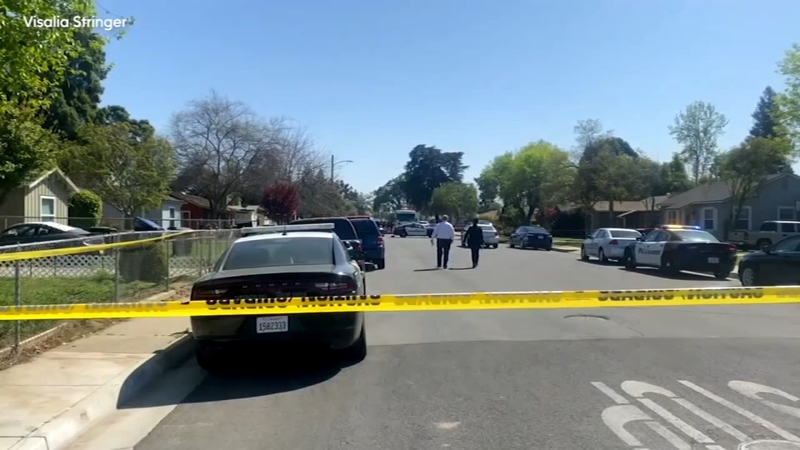 VISALIA, Calif. (KFSN) -- A family disturbance call ended in deadly gunfire in the South Valley when a man with a knife charged police officers.

Visalia Police received a call Wednesday afternoon from a person who said there was a man with a knife threatening family members.

Officials say the first officer at the house on North Conyer Street was confronted by Ivan Cuevas, who charged at him with the knife.

Captain Candido Alvarez says Cuevas did not listen to the officer's commands.

"And subsequently the individual charged at our officer, still with a knife trying to attack the officer with the knife and the officer fired several shots, striking the subject several times," Alvarez said.

Cuevas was pronounced dead at the hospital.

Police revealed that Wednesday afternoon was not the first interaction they had with him that day.

At around 3 am, police say they arrested Cuevas at the same home for possession of methamphetamine.

He was booked, released, and returned to the home in the afternoon.

The 27-year-old has racked up numerous felonies over the last five years and the California Department of Corrections and Rehabilitation reports that he was released from state prison earlier this year.

He served a little more than a year after being convicted of assault related to an incident that happened in July of 2019.
Report a correction or typo
Related topics:
visaliadeadly shootingvisaliaofficer involved shooting
Copyright © 2021 KFSN-TV. All Rights Reserved.
OFFICER INVOLVED SHOOTING

How does an officer use a gun instead of a Taser?
More Videos
From CNN Newsource affiliates
TOP STORIES