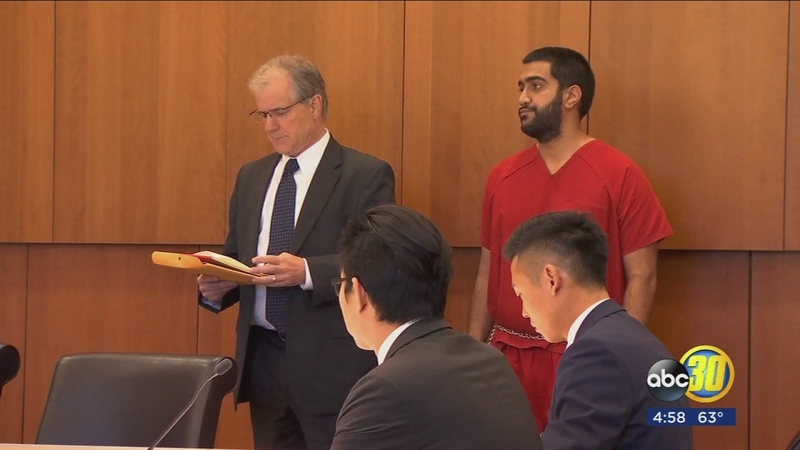 The District Attorney believes the suspects traveled from their home in Modesto to commit the robbery. The young cashier who died was from India here on a student visa. His family has asked for the maximum punishment.
RELATED: Valley man in custody for killing Tackle Box Mini Mart clerk, officials say

Savirant Singh Athwal stood in court Tuesday, nervous and unfamiliar with a courtroom, according to his attorney. Mark Coleman said his client has a clean criminal past and this is a case of mistaken identity.

Some of the evidence is video taken from surveillance cameras that shows two suspects stealing cigarettes and cash, then shooting the clerk on the way out. District Attorney David Linn says it was a cold-blooded murder caught on tape.

Madera County District Attorney, David Linn said, "I believe this case is one of the strongest cases we've had in four years."

Sivarant pleaded not guilty in a Madera County Court. Prosecutors say he was not the shooter but present and participated in the robbery and homicide.

"On either of these cases I don't expect a plea, I believe this case will go to a jury trial since we are asking for the ultimate punishment of death in both cases."

Sivarant's family hired Coleman to represent him. The defense was provided with the complaint and evidence Tuesday morning.

"My client strongly professes his innocence and my job is to prove the DA's allegations to be untrue," Coleman said.

Coleman believes the case centers on circumstantial evidence. Prosecutors say the suspects were familiar with the Tackle Box but will not reveal any connection to the convenience store.

The DA said the suspects put the community at risk during this bold crime, that could have caught any customer off guard and in serious danger during the holdup.

The victims family came to the United States from India to meet with the DA. He said they are distraught by the homicide.