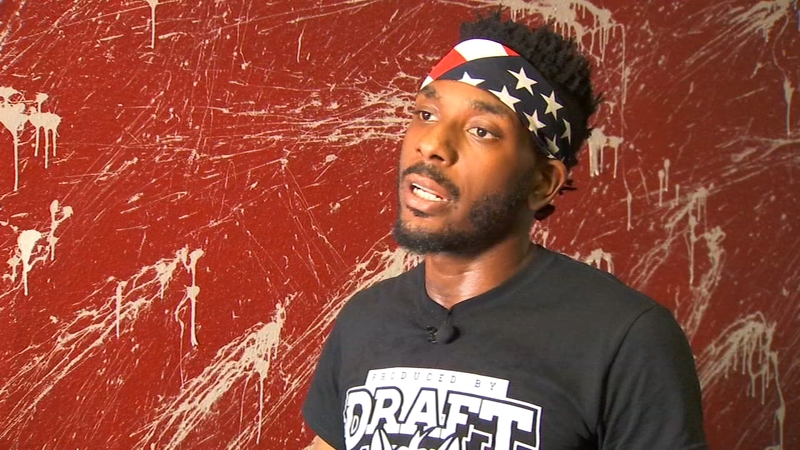 FRESNO, Calif. (KFSN) -- A Fresno man was left baffled about why a shooter targeted him and his friends.

As police search for suspects, the victim, who calls himself "Draft" said he's dealing with the physical, emotional and now financial scars of the violence.

Draft suffered gunshot wounds after being shot outside his business in east central Fresno.

"I remember getting on a wheelchair at the hospital and then surgery and then I woke up the next day," he said.

A nine-inch scar sits across most of his stomach. It's where doctors had to cut to remove the bullet that struck him. Their efforts were unsuccessful, and the bullet remains inside him.

A white patch now covers where it entered. Draft said it's still painful.

"It varies, I have more pain where I have my staples and my gunshot wound," he said.

The shooting happened last Friday morning at around 3:30 a.m.

Draft says he and his three friends were getting ready to leave their business. As they were walking to their cars, shots rang out.

A bullet hit Draft in the stomach, one of his friends was also shot.

Police said they believe the group was targeted, but are unsure why. Draft, on the other hand, says, they were innocent bystanders.

"I feel like just because we are not gang members and not related to anything that is violent that we got picked as random victims," he said.

His injuries are now setting him back.

For the last month Draft and his friends worked on opening a recording and dance studio for a local nonprofit in the same building.

The business is supposed to open this Saturday, but now that is looking unlikely.

He said the crimes in the area are scaring some of his clients away.

About a week ago 20-year-old Isaiah Casillas was stabbed to death in the same shopping center.

Police say the two crimes were not related.

Investigators continue to search and are hopeful someone in the area may have surveillance video.