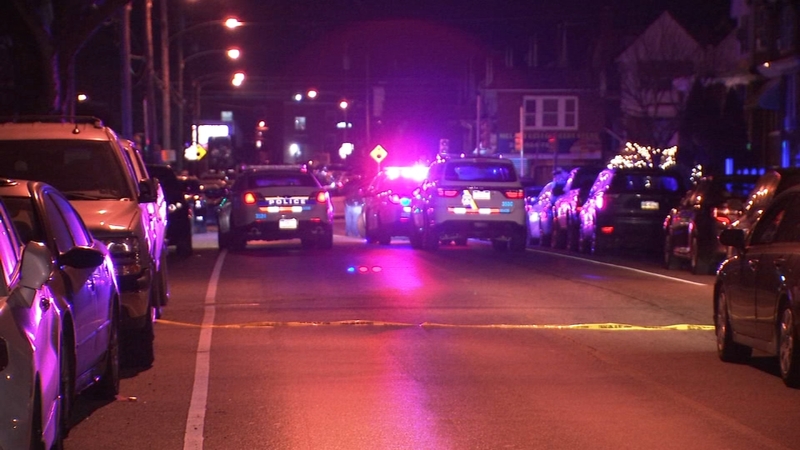 PHILADELPHIA -- Philadelphia police say a man killed his wife and injured her 14-year-old son in a stabbing attack witnessed in front of children on Christmas morning.

Officers arrived to the scene to find a 35-year-old woman outside suffering from multiple stab wounds to the abdomen. She was taken to the hospital where she was pronounced dead.

The 33-year-old male suspect was standing over the woman, police say. He was taken into custody.

"I was chilling in my room and I just heard some loud noises. Then, I think I heard a shot and then I heard the kids screaming," said a man, who did not want to be identified.

Officers found a 14-year-old boy inside the home with stab wounds to his thigh. He was taken to the hospital in stable condition.

According to police, an altercation started inside the home and spilled out into the street where the female victim and the suspect were found.

There were six children in the home ranging in age from 8 to 16.

Police say one of the children took the knife used in the killing, a butcher knife with a 10-inch blade, into the house in order to keep the suspect from stabbing anyone else. It was found in a second-floor bedroom.

The man was identified by the children as the stabbing suspect, according to police.

"(They) said the 33-year-old male stabbed the 35-year-old female inside the property, chased her outside, and continued to stab her when she was outside," Philadelphia Police Chief Inspector Scott Small said.
All of the children were taken to police headquarters to be interviewed.

"We believe all of them witnessed the incident or at least part of the incident," Small said.

The suspect suffered cuts to his hands and was taken to the hospital to be treated before being transferred to police headquarters. Police believe he cut his own hands while stabbing the woman and the teenager.

Small says preliminary information leads police to believe the suspect and the female victim are or at one time were husband and wife. Police also said the man had been heavily drinking.

They also say the 14-year-old is the son of the deceased woman. They say everyone lives in the home is believed to be related in some way.

Police say there were clear signs of a violent altercation inside of the home.

"It's pretty clear from the crime scene inside that everything happened initially inside. We found a crime scene on the second floor, as well as on the first floor, which consisted of a large amount of blood, there's also broken glass, there's also overturned furniture. So there was clearly a violent struggle inside," Small said.

"It's horrifying, it terrible. It's something that should never happen and I just can't imagine the impact it's going to have on the children later on," said Mike Jackson, who lives nearby.