Man tells 911 he killed his family before arrest: police

KTRK
By Shelley Childers
TEXAS CITY, Texas -- Police say a 27-year-old man confessed to killing three children and shooting a woman in a call to 911 dispatchers shortly before his arrest.

Junaid Mehmood was taken into custody late Thursday behind the Panera Bread restaurant in southeast Houston on El Dorado, just hours after police made the gruesome discovery in Texas City.

Mehmood was audibly distraught in the back of a patrol car as he awaited transfer into Texas City police custody.

Our cameras were there when Junaid Mehmood was transferred by Houston police into the custody of the Texas City Police Department.

Investigators said he was "incoherent," emotional and yelling at times, and that he confessed to dispatchers, "I killed my family."

Officers said they were responding to a welfare check around 6:15 p.m. at the Pointe Ann Apartments. When they arrived on 10th Street North, they discovered the victims' bodies and found a woman with a gunshot wound to her head.

Two of the victims are believed to be 2 and 5 years old. The third victim was an infant, police said.

The woman was transported to the University of Texas Medical Branch in Galveston, where she is in stable condition and is being treated for her wounds.

We do not know the cause of death of the children, or what led up to this tragic situation. 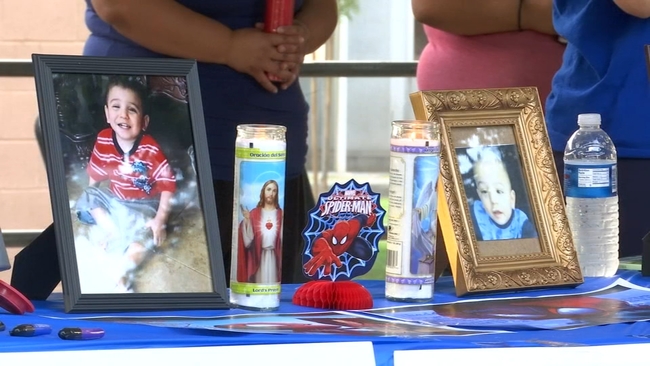