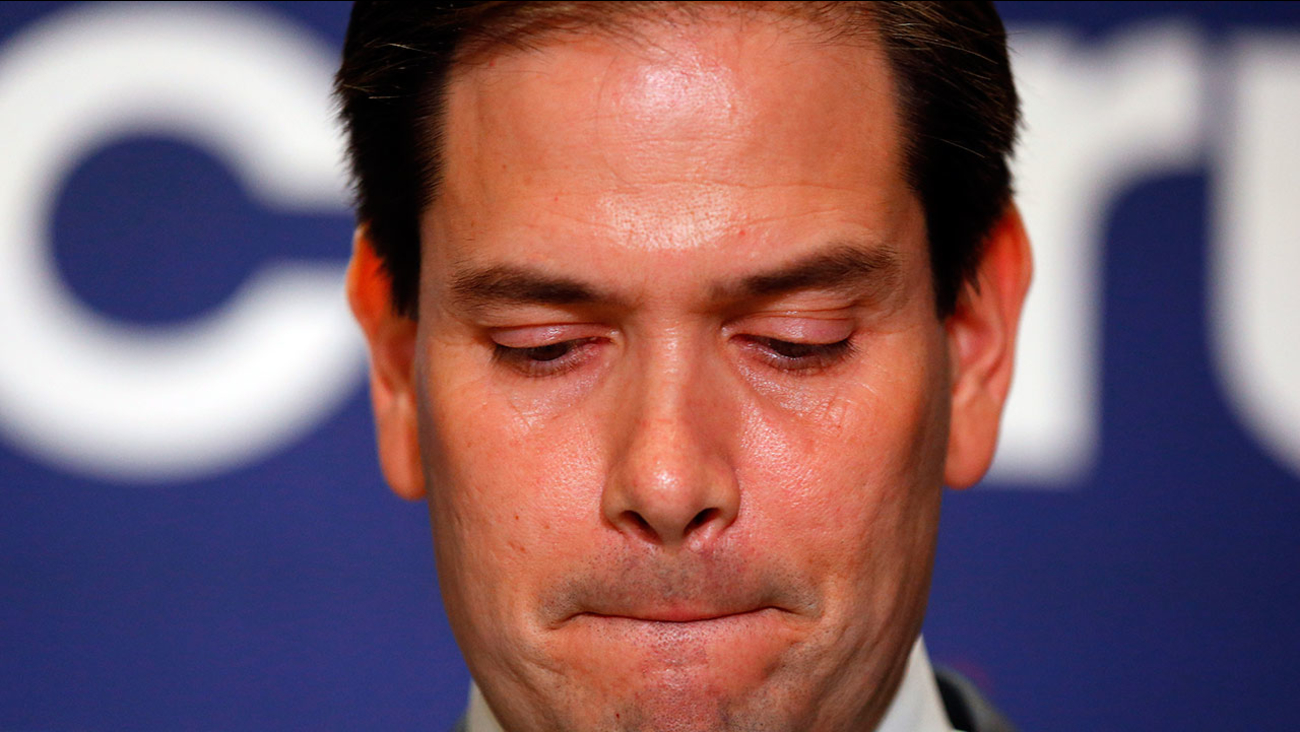 FRESNO, Calif. (KFSN) -- Republican presidential candidate Marco Rubio dropped out of the race for president on Tuesday, ending his White House bid after a humbling loss in his home state to Donald Trump.

"It is not God's plan that I be president in 2016 or maybe ever," Rubio told a crowd of supporters in Miami.

Rubio's decision was prompted by losses in all but three of the presidential nomination contests, but Florida's winner-take-all primary proved the most devastating. Only six years earlier, he was a tea party favorite who crushed the GOP's "establishment" candidate to win a seat in the U.S. Senate.

But the political tables turned on the Florida senator as a 2016 presidential candidate who was lambasted as mainstream in a year when voters cried out for an outsider.

In the final week, he dedicated time and resources almost exclusively to the Sunshine State, urging voters to stop Trump from "hijacking" the Republican Party. He went so far as to tell his supporters in Ohio to vote for Buckeye State governor John Kasich since his chances were better to win there.

Despite his intense rivalry with Trump, Rubio only indirectly criticized him during much of the campaign. He pivoted to an all-out assault on the businessman's character and ethics after a dismal March 1 Super Tuesday performance when he clinched only one of the 11 contests.

In recent weeks, the attacks deviated from policy to personal. At one point, Rubio equated Trump's small hands with his manhood. Trump began regularly referring to the senator as "little Marco." But the strategy backfired with voters and donors and Rubio later said he regretted the attacks.

Like other Republicans, Rubio had pledged to support the eventual GOP nominee. But, in recent days, he expressed having second thoughts. He told reporters Saturday that the chaos and divisiveness at Trump's rallies, including the one in Chicago canceled last week, had made it harder for him to view the front-runner as a viable candidate.

Even before the establishment came out in droves to back the 44-year old senator, he seemed destined for the national spotlight. Time magazine placed him on its cover in early 2013, dubbing him the "Republican Savior."

In under a decade, he had gone from West Miami commissioner to state legislator to Florida House Speaker. In 2010, he challenged a sitting governor -- christened by establishment Republicans -- for a U.S. Senate seat and won after starting more than 50 percentage points behind in the polls, catapulted by a wave of Tea Party supporters.

The Senate wasn't enough for the ambitious Cuban-American who at an early age dreamed of playing pro-football but, instead, became a successful politician.

A married father of four, he used the symbolic Miami Freedom Tower as the backdrop to launch his presidential campaign, where tens of thousands of his fellow Cuban-Americans had been processed as refugees.

"The time has come for our generation to lead the way toward a new American Century," he told the crowd in first presenting what would be his campaign theme.

Yet, it was his immigrant family's story that was most appealing. The bartender dad; the Kmart clerk mom. Leaving Cuba. Realizing the American Dream.

At the time, Rubio's friend and one-time mentor, former Florida Governor Jeb Bush, seemed his biggest hurdle to get to the Oval Office. After all, both had Hispanic families (Bush's wife is Mexican-American) and spoke flawless Spanish.

Enter Trump. By mid-summer, he turned the Bush-Rubio rivalry into a telenovela without the sizzle. Bush dropped out after South Carolina.

Rubio had rarely attacked Trump or his other GOP rivals during much of the campaign. Instead, he and his team embarked on a stay-under-the-radar strategy, emphasizing his foreign policy chops on frequent Fox News appearances while slamming President Barack Obama and Hillary Clinton.

In the Iowa caucuses, he came in a better-than-expected third place, nearly beating Trump for second. He then banked on a big showing in New Hampshire but a stunningly poor debate performance - in which he frequently repeated talking points and was called a "scripted" politician by rival Chris Christie - led to a dismal fifth place.

"Our disappointment tonight is not on you. It's on me," he told supporters that night.

Rubio rebounded in South Carolina, where he came in second place behind Trump and had edged Ted Cruz, Nevada, where Rubio spent part of his childhood, delivered another second place finish.

But questions arose about which state Rubio could realistically win. The campaign dismissed the chatter, saying they were running a national campaign but the doubts grew deafening on March 1, Super Tuesday, when Rubio collected just one won of 11 contests.