Fresno State QB Marcus McMaryion cements Valley legacy through his focus, faith on and off the field 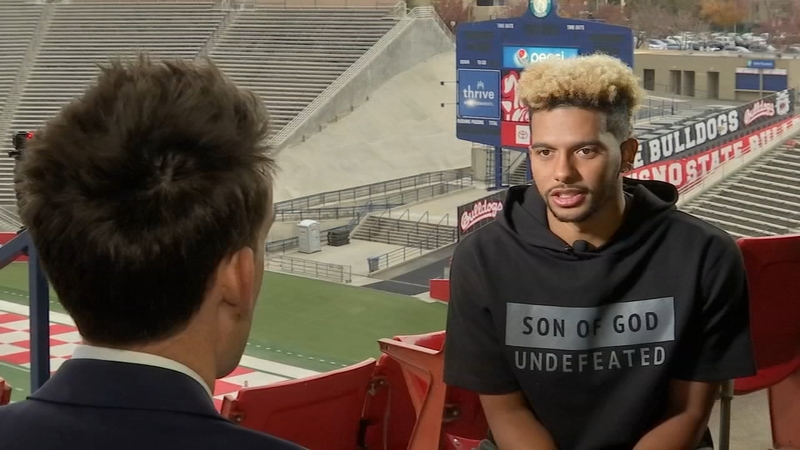 Marcus McMaryion cements his legacy in the Central Valley with his faith, focus on and off the field

LAS VEGAS (KFSN) -- At Fresno State, success and quarterbacks are practically synonyms. Marcus McMaryion will leave as one of the winningest quarterbacks to ever put on the Bulldog uniform.

"He's been literally everything we've needed in a quarterback-a strong leader on this team," said Matt Boateng.

But his journey to the top was anything but a sure thing.

"I always joke around and say that it's unbelievably believable but you put the time and the effort in and you just hope that you can get to this place where I'm at now and when you get there you just want to ride it as long as you can," McMaryion said.

Marcus' journey to the bright lights began in a town of less than 25,000.

"There's not a lot of players that get out of here and make it to the division one level. A tremendous presence in the huddle-he's kind of like a coach out there," said Kevin Sharton.

After falling in 2012, McMaryion led his team back his senior year-this time they wouldn't be denied.

From Arizona to Washington, even Boise State, a lot of schools made recruiting trips to Dinuba. But McMaryion left the Valley for Oregon State.

After struggling to see playing time, then struggling on the field, McMaryion looked to have turned a corner in 2016 when he led the Beavers to wins over Arizona--and their biggest rival Oregon.

But that Spring saw a coaching change and with it a new starting quarterback. On August 6th McMaryion announced that he would transfer. He would commit to Fresno State on August 8th.

Marcus described that two-day window, "I definitely knew I wanted to come closer to home and be closer to family so they could travel to games more frequently. I think I was more surprised than anything the caliber of the schools that reached out outside of Fresno."

Texas, Iowa and even in-state rival Oregon reached out. But McMaryion had decided-he was ready to come home.

"They (Fresno State) were losing games by 3 points, by 2 points, by one point and I thought man these guys are close to being a really good team," Marcus said.

Despite the Bulldogs coming off a 1-11 season, Marcus started the 2017 season on the bench. Jeff Tedford, in his first year at the helm, didn't start him until game four against Nevada.

"It's definitely something I'd just been searching for and missing since high school. Just having the belief of a coach to throw you in there and say the keys are yours go drive as fast as you want or as slow as you want. Coach Tedford saying I don't have to be Superman out there. I don't have to do anything I'm not comfortable with-just go out there and play your game," McMaryion said.

Before every game, Marcus takes a walk around the field by himself.

"It's a piece in the bible where the Israelites are circling the walls of Jericho-getting ready for battle, for war, they're not gonna know what's going to happen, just trusting God, that's he's going to take care of everything," he said.

These past two years, that faith has led to a restored a belief in Bulldog football.

Whether it's been with his precision throwing the football or his ability to run for yards, the Dinuba signal caller has always seemed to make the right decision.

"He's good with his words too. He has these little speeches before games and stuff, and he's a good dude," says teammate Ronnie Rivers.

Like in high school, McMaryion led his team to the title game his junior year ultimately fell short but wrote a different ending for his senior season.

"That was unreal I mean I knew it meant a lot. Guys were talking about it there was definitely a buzz going into the game but just to see the raw emotion of reactions after," Marcus said.

RELATED: Derek Carr's announces his wife is expecting their third child in May

As great as his football career has been, it's Marcus' time in the community that's helped cement a legacy in the Central Valley.

"People here in Dinuba, we walk around with our heads held high, and we're very proud of Marcus. Not only because of the great football player that he is, but he's a tremendous person."

For a college quarterback, time can be hard to find, but Marcus has frequently given his at local schools and Valley Children's Hospital.

"Not just winning football games but his attitude, his leadership. He's just done a phenomenal job with this team and in the community and been a great representative for our university and this football team," said Coach Tedford.

"The fact that you walk down the street and little kids say 'are you Marcus McMaryion?' It kind just-yeah that's me, so it's a great feeling knowing that people are watching me and I have a chance to be a role model," Marcus said.

But no matter how larger than life Marcus becomes he's still humbled by his journey from a farming town, to the football field.

Led by a faith in something greater than himself that brought him home.