Meet Margaret Tyler, the royals super fan who has covered her home with 10,000 trinkets 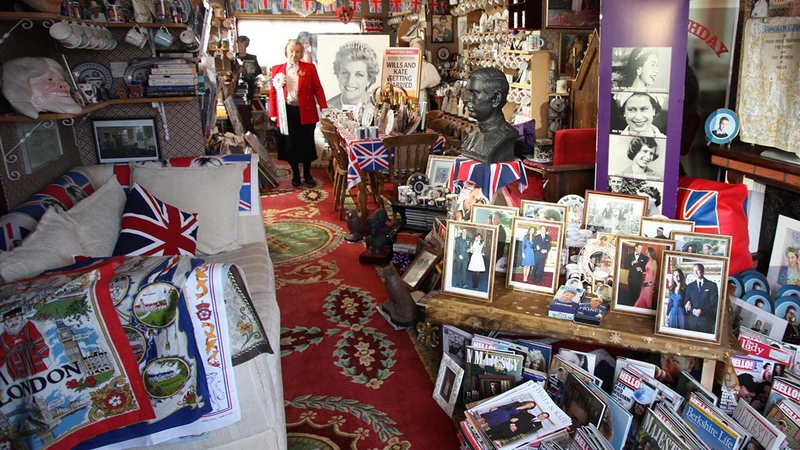 LONDON -- Margaret Tyler has a space in her home for every member of the royal family. The super fan has 10,000 pieces of royals-themed memorabilia covering seemingly every inch of her home.

"I just enjoy collecting on the royal family," Tyler told ABC News in 2011. "It's just such a fascinating subject."

With the royal wedding approaching, Tyler has begun building up her Prince Harry and Meghan Markle stash. She has amassed books, photos, dolls and more to pay tribute to their romance.

The retired charity worker has been collecting for four decades, since she was a teenager. In her home, which has become a tourist destination, you can find "mugs, life-size cutouts, effigies, tapestries, books, posters, toilet seats, nodding corgis, tea-sets, and countless other nick-nacks," according to Getty Images.

Some of her items are highly unusual. As of 2011 the collection included a jar of jelly infused with a piece of Princess Diana's hair, according to ABC News.

Speaking of Diana, it's clear that Tyler holds a special place in her heart for the late mother of the groom. She has an entire room of the house known as the "Diana room."

Tyler met the British icon just six weeks before her death. When they met, Tyler was wearing a rosette that had Diana's face on it.

"She threw back her head and laughed when she saw it and said, 'Oh you have got it bad,'" Tyler told ABC News.

ABC News' coverage of the royal wedding begins at 5 a.m. ET on Saturday.