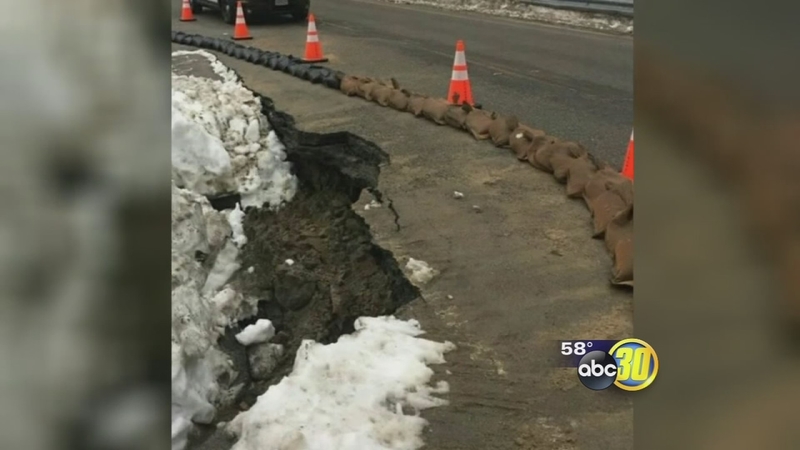 MARIPOSA COUNTY (KFSN) -- On Highway 41 near Fish Camp, a main roadway into Yosemite National Park, traffic was squeezed through one lane. And below the tires of the commuters unstable soil has already given way.

"At least until next week we're going to have one way traffic control in place there on State Route 41 in Mariposa County," said Cory Burkarth, Caltrans spokesperson.

A wash out is the latest damage from recent storms. Caltrans said they made a temporary fix there three weeks ago when the road was getting weak, but that fix was hit with six feet of snow and then a foot of rain. And because of even more rain it will likely take weeks before its fixed.

"The worst case scenario is that we would have to close that section of State Route 41," said Burkarth.

Another concern for Caltrans crews is mud and rockslides. Right now they are watching 25 places between Coarsegold and Fish Camp that could crumble.

"We're light. We haven't had that much traffic through groceries and so on," said Don Berg, Chevron manager.

The hope for Berg is this rain turns into snow and lots of it.

"We have chains all around back there. We have for the SUV and trucks up there and we have tighteners. So we're just hoping for snow so we can sell some chains."

With colder weather come tougher conditions for working crews who are waiting for relief.