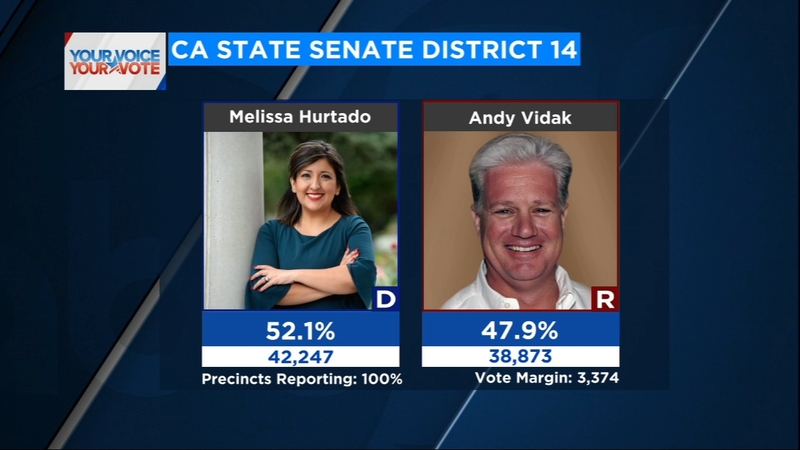 FRESNO, Calif. (KFSN) -- One of the biggest surprises from Election Night came from the 14th California Senate Seat race.

The two were neck and neck on Election night but it appears Melissa Hurtado will take over for Andy Vidak of Hanford in District 14.

The Democrat from Sanger used a grassroots effort to help nudge her past the heavily favored Republican.

The Sanger city council member captured 52% of the vote to oust Vidak in the 14th District race but provisional ballots are still being counted.

"I want the voters to know that we have a lot of work to do and we need to work together and have a voice, the election is just one part of it," said Hurtado.

Hurtado's expected win means Democrats would regain the Senate supermajority they lost in a recall election earlier this year.

Fresno County Republican Party Chairman Fred Vanderhoof calls Hurtado's upset and the implications it could have on the state senate cause for concern for the local ag industry.

"We're the biggest farming most productive farming area in the world really. There could be policies coming down against farming against ag. We need to keep it strong," said Vanderhoof.

It was a back and forth contest between Vidak and the Democratic challenger.

She even knocked on doors to remind families that every vote counts, working to get people out to vote up until the last moments.

"The work continues on and you should continue to let your representatives know what your issues are and I've heard those coming across while knocking on doors," Hurtado says. "I know I'll need to continue to hear them beyond today."