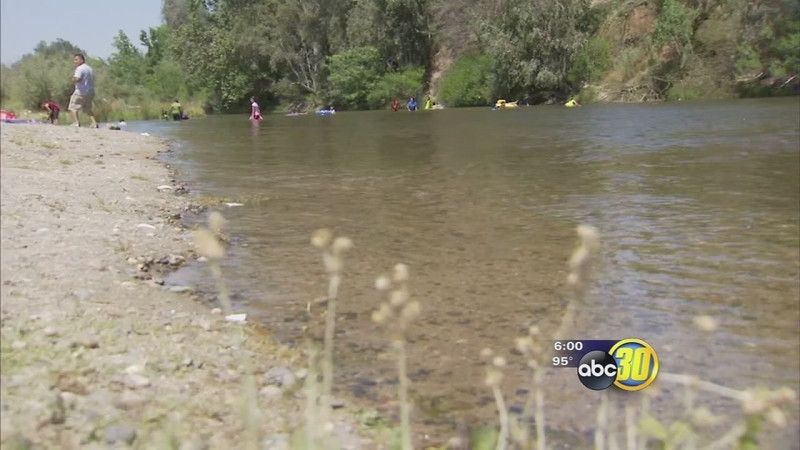 REEDLEY, Calif. (KFSN) -- It has been a busy Memorial Day weekend on the water and the rivers are crowded with people looking to cool off, but there is danger lurking beneath the surface.

Deputy Caleb Jonas just started patrolling the Kings River this year and he has already witnessed the water claim a man's life.

"He was just laying lifeless there, and they were doing compressions on him," said Jonas.

It was Saturday, in the middle of a busy Memorial Day weekend. Jonas helped Reedley police move the man to shore but it was too late. Erik Tolentino, 21, drowned after he was swept away by the current.

"This water isn't a joke because he was a fairly built young man," Jonas said.

On Monday, Dalila Beristain and her kids were swimming in the same water.

"Right here, I have to keep them right here, that's why I was sitting down in the chair but thought, no, I'll just go in and play with them
make sure they're safe."

Miguel Gaspar also plays it safe. We found him 40 miles away at Skaggs Bridge where the San Joaquin River runs, and his kids all had new life jackets.

"Things can happen in a second and suddenly, things can change."

He was at the bridge last year when a 50-year-old man drowned. A month before that, a six-year-old boy died. His family searched for him and found him under the water, with his feet trapped in the mud.

"It is tragic, at the same time, it makes you more concerned to take a closer look at your child," said Gaspar.

Back at Reedley Beach, Jonas said the river is even more dangerous this year. It is ten feet deep in some spots, and the current below the surface is twice as fast as it was last season.

"If you tried to stand out there, your feet will go out from underneath you."

It is an unforgiving place, with water that is 52 degrees and tough to escape, Jonas said, especially when someone chooses to drink and jump in.