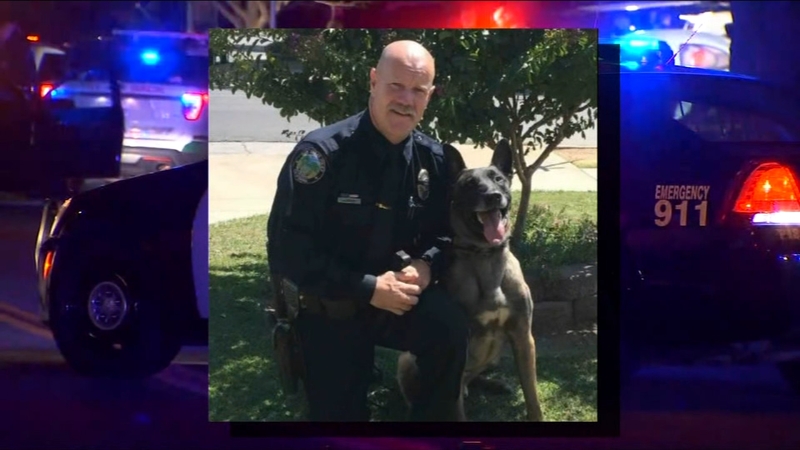 FRESNO, Calif. (KFSN) -- A very scary night for dozens of neighbors in this area of Sydney Lane and Lopes Avenue, some having to evacuate their homes.

It happened on Tuesday night when a chase and standoff turned deadly. Many of the neighbors identified the man shot by law enforcement as Johnny Mathis, a Dos Palos police officer.

The Merced County District Attorney's Office is now investigating, but have not released information who fired the deadly shot, and what led up to the standoff in the first place.

Neighbors caught the chaos on camera.

"All the police were here, and that's when a huge gunfire broke out..at least 10 shots," said neighbor Keith Ensminger.

Bullet holes and a smashed garage door can be seen from the road.

Keith Ensminger believes the incident started as a police chase.

"It seems like the sirens went further into town, then swept around and it was obvious they came back here. I came out took a look, and that's when I heard the intense gunfire," he said.

Neighbors say a swarm of officers and deputies covered the area, and soon after, they heard the gunfire.

"Different pop, pop, pops and all of that. So my son, was like those are gun shots," said resident Cindy Gruisham.

A witness shared a video telling Action News that the family was escorted out of the home during the standoff.

Erick Guttierez across the street says police also showed up to his home.

"They came to our door and evacuated us, because we're in the line of fire," Guttierez said.

DA officials haven't confirmed the name of the victim, or the events leading up to the shooting, but in a press release, they did say the officer was on paid administrative leave at the time of the incident.

"I just saw a man who had a strong commitment to law enforcement. He was a person that was willing to help and assist," he said.

Mann says it was the Mathis family that helped him during his son's first suicide attempt and his heart is breaking for the family.