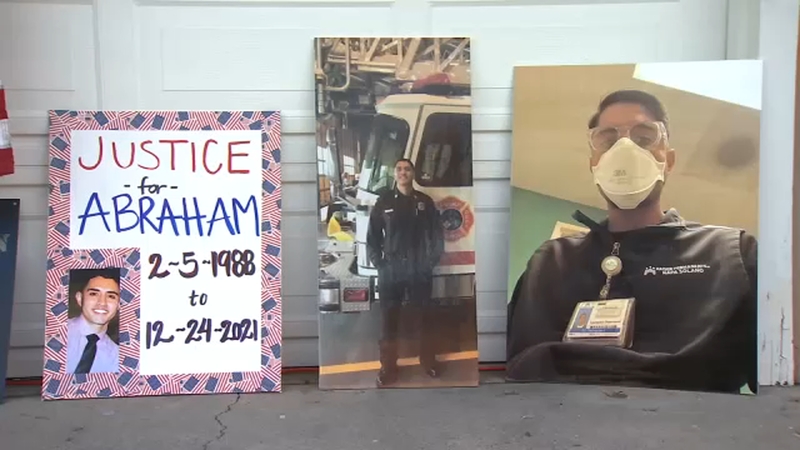 MERCED, Calif. (KFSN) -- A North Valley family is devastated and divided after the murder of 33-year-old Abraham Espinoza on Christmas Eve. The man charged with his murder is his own brother-in-law.

Lorena Gomez could have never known that opening presents on Christmas Eve in Merced would be one of the last memories her family had with her brother.

"He was murdered on Christmas Eve in front of family," she said. "The attacker was supposedly family."

Family members who were in the garage that night say a conversation between Abraham and his sister Brenda escalated, eventually ending in him being stabbed to death.

Lorena says family members are haunted with the memory of seeing their beloved brother and cousin killed before their eyes, with several children home at the time too.

"He waited for the perfect moment to make his cowardly act," she said. "The only victims here were my brother and everybody else who was traumatized."

Barron was arrested by Merced police on Christmas Eve. Abraham's family was left with only the memory of the man who served his country in the Air Force for 8 years, and his community as a firefighter and ER technician at Kaiser Permanente in Vallejo.

He was recently engaged and planning a wedding with his fiance, Janette.

"Everybody loved him," said Lorena.

Abraham's family hasn't spoken with their sister Brenda, the suspect's wife, for weeks now. Action News reached out to the couple, who declined to comment.

On Wednesday, Barron pleaded not guilty to murder in Merced County Superior Court. Abraham's family is disappointed to learn that they'll have to relive their nightmare in a trial.

"We learned to kind of accept him for who he was but we saw certain things that raised those red flags," said Lorena. "If you guys see red flags, don't ignore them because we did, and here we are."

The family has come united to each court appearance, shared updates on the Instagram page @JusticeforAbraham along the way, and draped signs and pictures all over the Merced home where Abraham took his last breath.

"If you ask me what justice is and what we ask for, this deserves the max," said Lorena.