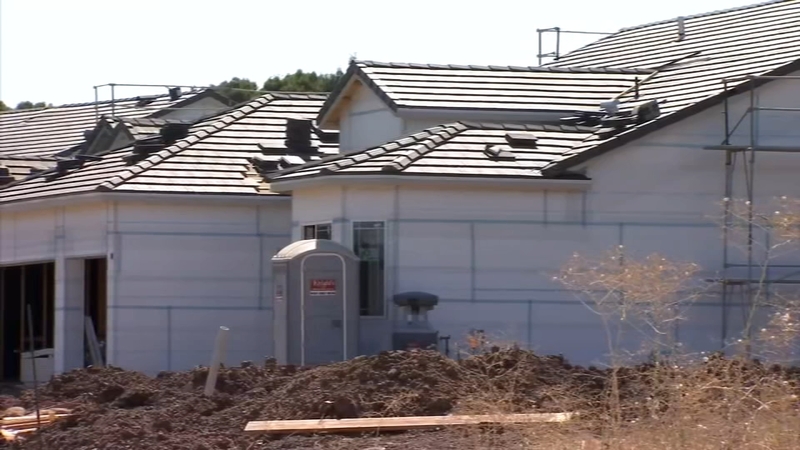 MERCED, Calif. (KFSN) -- The sounds of new construction can be heard all over the city of Merced these days.

"You can see that we have construction going on, not just in north Merced but also South Merced, what we call East Merced near Campus Parkway. And if you consider this west because it's on the western edge, even west. So the nice thing is we're kind of growing in every direction," says Director of Development Services Scott McBride.

So far this year, there have been nearly 500. Several new apartment buildings are also in the works to help keep up with growing enrollment at UC Merced.

"So we don't have students who are doubling or tripling up in rooms in neighborhoods. They can have opportunities to be in apartments where it's a different living style," he says.

The housing boom is bringing new jobs in many construction-related fields, increasing impact fees that can help spruce up parks and other amenities, and helping to attract more shops, hotels, and restaurants. But it is causing some frustration for current homeowners who are looking to sell.

"We were in a seller's market for so long but now we're shifting to a buyer's market, and in that shift, sellers still think their property is worth this and the developers are selling this for a brand new home with all the amenities, and so that's slowed down our market," says realtor Scott Oliver.

Oliver says many of the developers are able to offer good deals because they purchased land during the recession at rock bottom prices and waited to build. But he says buyers should remember that new construction can come with extra costs.

"Landscaping is a big thing because nowadays the builders don't do back landscaping. They don't even do patios anymore. You have to hire your own contractor to do patios, patio covers, landscaping," he says.

But Oliver is optimistic the Merced market will continue to strengthen over the next year, and he says residents should feel good about all of the new opportunities coming to the community.
Report a correction or typo
Related topics:
real estatemercedhousing marketreal estate
Copyright © 2022 KFSN-TV. All Rights Reserved.
REAL ESTATE
Are Californians to blame for rising home prices in other states?
Report: A's pushing forward with potential move to Las Vegas
House from 'A Nightmare on Elm Street' is for sale
'Nightmare on Elm Street' house for sale in LA
TOP STORIES
Foggy Day School Schedules, Fog Tracker from ABC30
CHP: 1 in critical condition after being hit by car in central Fresno
CA proposal would let older kids get vaccines without parents' consent
Fresno man accused of killing dog pleads not guilty
Kamala Harris to discuss wildfire recovery efforts during SoCal visit
Multiple people displaced after house fire in SE Fresno
Parlier police searching for missing 16-year-old girl
Show More
California water districts will get more supply than planned
Pick your own citrus at this Valley farm
US confirmed 1st COVID case 2 years ago today
Video shows catalytic converter theft in Fresno in less than 2 minutes
Valley hospital beds continue to fill with COVID patients
More TOP STORIES News