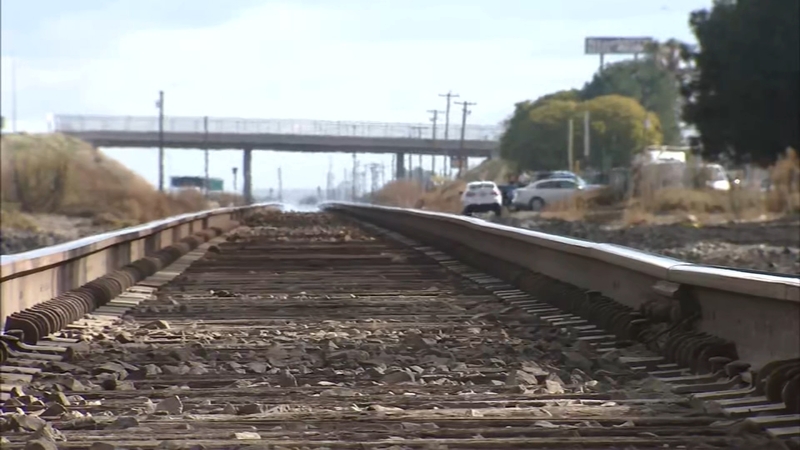 MERCED, Calif. (KFSN) -- Merced Police Officer Craig McKeeman can often be seen patrolling the streets of Merced, but this week his sights are set on the train tracks.

"We're watching the railroad crossings for safety violations: car stopping on the tracks, pedestrians crossing after the arms went down, vehicles driving around the crossing arms," McKneeman said.

In Merced, there are two sets of train tracks running right through the city.

The Merced Police Department is collaborating with Amtrak Police and Operation Lifesaver to crack down on anyone who makes the dangerous decision to try to beat a train for National Rail Safety Week.

"If the lights come on, and you cross the railroad tracks that is technically trespassing. So it is subject to a citation, and it's a hefty fine," said Merced Police Sgt. Dan Dabney.

Dabney says California ranks number one in the country for people trespassing on train tracks, and Merced is too often the site of fatal accidents. The most recent happened Sunday morning when a man was killed on the tracks near Bear Creek Drive.

Back in May, a Hoover Middle School student died while walking on the tracks near his campus. The Merced City School District is now also partnering with California Operation Lifesaver to provide in-depth assemblies at schools near rail lines.

Dabney said a locomotive can weigh more than 400,000 pounds and can take up to a mile to stop when pulling a large load of freight. He said they are quieter than they used to be, so people wearing headphones are even less likely to hear them.

"We've always kept train safety at the forefront in different communications at the school sites, regular reminders, and phone calls home, but this year we're doing an extra push to ensure that our students are safe around train tracks, paying attention, staying alert, and staying away and off of train tracks," said MCSD Associate Superintendent Doug Collins.