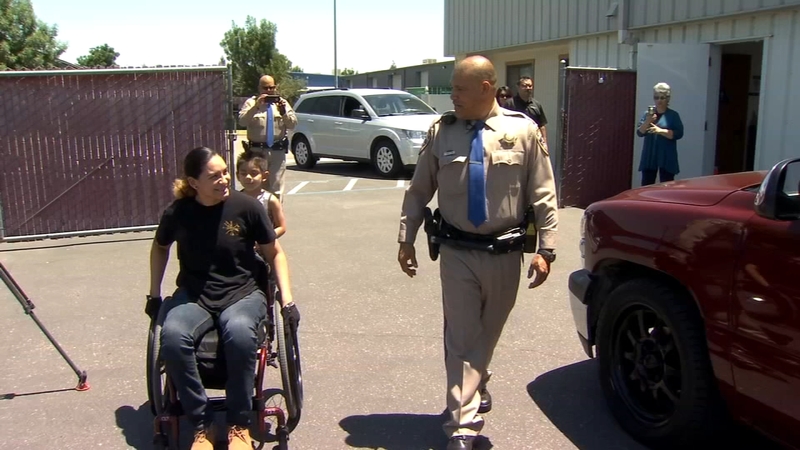 FRESNO, Calif. (KFSN) -- The community has been fundraising for an honorary Fresno Firefighter-- on a journey to walk again.

Doctor's gave 22-year-old Mia Gonzalez just a 10 percent chance to walk after she fell at Sequoia National Park two years ago. She's been working to beat those odds ever since.

Over the last 2 years, Mia has had to re-learn how to sit up, put clothes on, shower... even drive.

"I realized 'uh oh he's going to pull me over' he busted a u-turn for me," Mia said.

While on her first solo drive since her debilitating accident, Mia Gonzalez got pulled over for speeding.

Mia said, "I was so focused on keeping a safe distance from the car in front of me, I didn't make sure that my speed was consistent."

Imagine the multitasking involved with using hand controls, to do what the rest of do with our feet. Because of that, Mia didn't realize she was speeding until she saw flashing blue and red lights. What happened next wouldn't end with a hefty fine and traffic school.

CHP officer Javier Ruvalcaba noticed her wheelchair and hand controls and decided he wouldn't just learn her story... he'd become a part of it.

"She had everything going for her and to have everything taken away, I just empathized with her," Officer Javier Ruvalcaba said.

Working part-time with Fresno's Fire department, the 22-year-old spends the money she earns goes to physical therapy. It's not covered by insurance, so adding permanent hand controls to her truck would have to take a back seat.

That's where Officer Ruvalcaba comes in.

He said, "I got a hold of the Ability Center and they were gracious enough to give us a discount and make it happen."

Having served Madera county for 15 years, Officer Ruvalcaba has become a staple in his community. Between his friends and the Madera Evening Lions Club, they were able to raise the money, for Mia's permanent hand controls within three days.

Gonzalez said, "it gives me freedom and allows me to go places. This allows me to be more independent than I've been."

Officer Ruvalcaba has a history of going beyond the call of duty. Two years ago, we were there as he escorted a woman that worked 10 years to become a U-S citizen, to her naturalization ceremony, after she totaled her car, on the way there. "It's not just about writing tickets and taking people to jail. It's part of the safety and service of the department. We help countless people on a daily basis," Officer Ruvalcaba said.