This year's event drew many more young faces from up and down California. Powerful songs and emotional speeches rang through the streets of Fresno, beginning first at Fresno's City Hall.

The annual event honors the late civil rights leader on what would have been his 88th birthday. This year, roughly 3,700 students joined the hundreds of people at Fresno's City Hall. They were all part of the California YMCA's Youth and Government program.

The students were already in town for a major conference but decided to participate in Fresno's MLK Junior March. 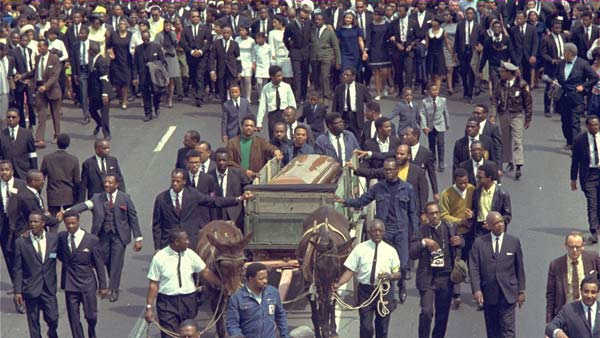 "Doing stuff like this helps them come together as a community and realize that we're not all different," Coleman Thorwer with the YMCA said. "We're one in the same and someone like Martin Luther King came with an important message and we should all listen to that."

"It's very important to a large group of our students that we support various racial and different issues, so things can hopefully have some change for our future," Leslie Kehl with the YMCA said.

Many were impressed with the students' involvement and hope their message of unity spreads to those who are watching. Members of the George L. Green #118 Masonic Lodge helped lead the parade and added they felt it was important to march since Dr. King was also a mason.

"Marching and seeing the different people, especially seeing a lot of young kids, there's a lot of young kids that look like they're coming from all over California just to be here in Fresno," mason Henry Milton said. "That's important."

Many also said the day's event was especially important in light of the inauguration of Donald Trump later this week. They said it's important to come together as a community at a time when our country is divided.
Related topics:
societyfresno downtownparadefresnomartin luther king jr
Copyright © 2020 KFSN-TV. All Rights Reserved.
FRESNO