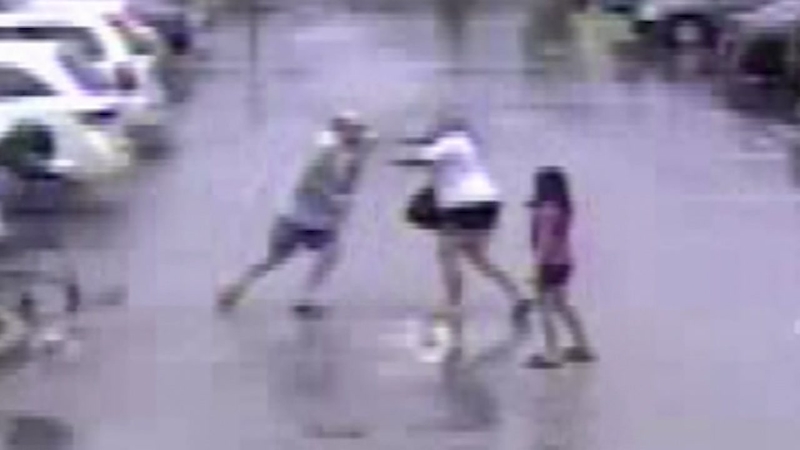 Mother of 2 beaten over shopping cart in Walmart parking lot

WAUKESHA COUNTY, Wisconsin -- Dramatic surveillance video shows the moment a woman was beaten in front of her two children at a Walmart store.

Cori Richardson says she was trying to get into her car with her baby and 9-year-old daughter when a man left an empty shopping cart right behind the vehicle.

"I yelled to him, 'can you please put your cart away?' and he said, 'no, there's people that they pay to do that.' So I was like, 'well, just don't leave it behind my car, please,' and he literally just came charging at me full force.'"

Cori told WISN-TV the man threw her to the ground, punching and kicking the woman before letting her back up. But then she says she realized he had taken her keys.

"So I asked him for my keys back and came at him," Cori said, "and then he attacked me again. But this time grabbing my hair. And threw me to the ground and kind of dragged me."

The attack happened right before her children, her youngest, an 8-week-old son, still in his carrier in a shopping cart as she was being beaten.

Police came to the woman's aid after shoppers called 911.

"One of the witnesses stood behind his car to try to get him to stop, so he couldn't leave. He then hit her with his car," Cori said.

The 60-year-old suspect, John Engebos, was taken into custody in the parking lot and faces charges of felony reckless endangerment, battery and disorderly conduct.

Engebos could be sentenced to as many as 10 years in prison, if convicted.

He is out on bond but is scheduled to appear before a judge on Aug. 7.
Report a correction or typo
Related topics:
wisconsinbeatingu.s. & worldwalmartsurveillance video
TOP STORIES
Massive fire started by possible arsonist destroys Fresno home
Bicyclist killed by hit-and-run driver in Madera County
1 killed after car collides with semi in Fresno County
Reedley police officers fatally shoot suspect after chase, carjacking
ABC30 editor spotted suspect in Fresno Save Mart, alerted employees
More than 75,000 pounds of baby formula lands in US amid shortage
Fresno woman creating charcuterie-inspired treats for dogs
Show More
Pfizer: COVID vaccine for kids 6 months to 5 years old 80% effective
78,000 pounds of infant formula arrives in US
Biden: US would intervene with military to defend Taiwan
Fresno police catch suspect after he falls out of Save Mart ceiling
Something strange is happening with our universe: NASA
More TOP STORIES News