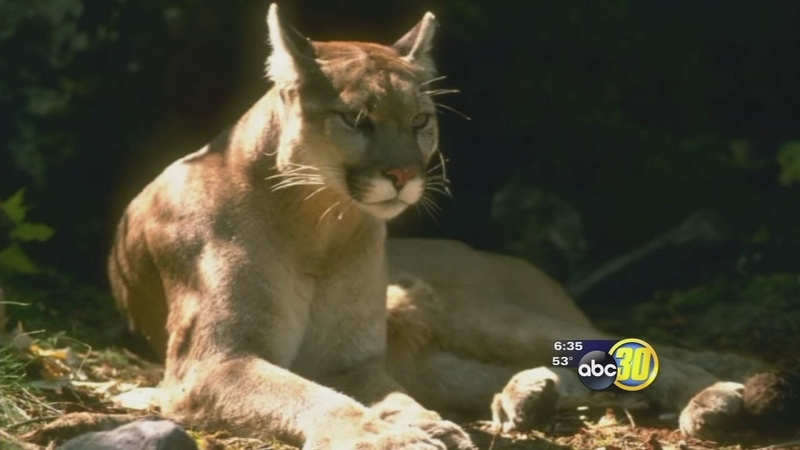 FRESNO, Calif. (KFSN) -- Tim Lindahl couldn't believe when his wife looked out their window and spotted a mountain lion-- since they live in a neighborhood less than a half mile from Highway 99. "I'm going, okay, I mean this is the Valley. I wasn't expecting any cats like a mountain lion or something."

But he grabbed his binoculars and saw it for himself. Lindahl said the animal slowly walked across his property and disappeared behind his barn. He called the Merced County Sheriff's Office, and a fish and wildlife warden also responded. "Fish and Wildlife did confirm the presence of a mountain lion based up on tracks that were seen," said Sheriff Vern Warnke, Merced County Sheriff.

A team of wardens returned to the area Monday to check the prints on Lindahl's property and other reported sightings nearby. A spokesperson said they found no other evidence of a mountain lion in the area. They say it's possible one young male is trying to find it's own territory and will likely head to a more rural area where it can find deer to eat. "I don't want to see him around here, there's a reason for him here, he's hungry," said Lindahl.

Officials said they have not seen an increase in mountain lion sightings for the Valley. But just last month, a home surveillance camera captured one eating a sheep in three rivers. That's why authorities said it's a good idea to take precautions. "Keep your dogs and cats in because mountain lions will use those as their snacks, and we don't want anything bad to happen, and again, I emphases do not approach the animal, call us stay inside-- Get your animals inside and call us immediately," said Sheriff Warnke.
Related topics:
merced countymountain lion sightingmerced countyanimal
Copyright © 2022 KFSN-TV. All Rights Reserved.
MERCED COUNTY
'Field of Honor' pays honor to military, 1st responders in Merced Co.
Man accused of murdering ex-wife's boyfriend in Merced Co. identified
Good Sports: Soccer returns to Merced College
1 killed, 1 hospitalized after shooting in Merced County
TOP STORIES
Man found shot inside car in southeast Fresno
DA to pursue death penalty against 3 accused in Fresno mass shooting
COVID testing company sued over alleged scheme
Anti-mask parent threatens to bring guns to school: 'Loaded and ready'
Regina King's son, musician Ian Alexander Jr., dead at 26
Truck with 100 monkeys crashes, 1 still on the loose, police say
Booster shots needed against omicron, CDC studies show
Show More
Le Grand woman charged with 3 counts of murder for deaths of children
NCAA criticized for changing policy on transgender athletes
Man shot and killed in central Fresno, police say
4 families displaced after apartment fire in NE Fresno
New details emerge in killing of mother and grandfather in SE Fresno
More TOP STORIES News