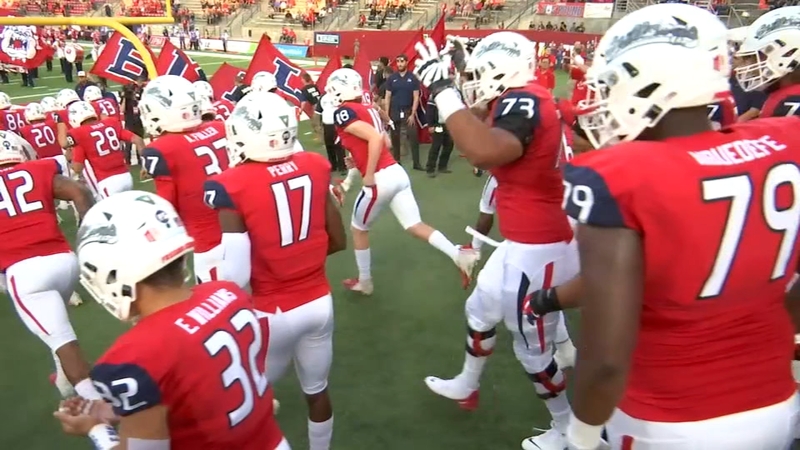 FRESNO, Calif. (KFSN) -- The Fresno State football team will not take the field at Bulldog Stadium in 2020.

The Mountain West Conference has announced that its fall sports season, including football, has been canceled due to concerns regarding the COVID-19 pandemic.

1943 was the last time Fresno State did not take the field in the fall (due to World War II). 2020 will be just the second time this occurs in the 99 year history of @FresnoStateFB. @ABC30

Conference officials say they are considering playing football in the spring. With the 12 Mountain West schools not playing this fall, there are now a total of 26 FBS who are in the group.

Last week, the conference initially announced a revised 2020 fall sports schedule which would have started on September 26th for Fresno State football, women's soccer, women's volleyball and men's and women's cross county. Football programs were given the
option to play 10 games total, with eight conference games and two non-conference.
The announcement comes as multiple Power 5 conferences are reportedly leaning towards canceling their college football season, including the Big Ten and Pac-12.

In a statement, Fresno State Athletic Director Terry Tumey said:
"We are supportive of the Mountain West Conference Board of Directors' decision regarding fall sports. As we have stated from the onset of the COVID-19 pandemic, the health and safety of our student-athletes, coaches, staff, and community have been, and will continue to be, our number one priority.

Season cancellation a blow to some businesses

"There was a lot of excitement from fans. People coming in, getting their hopes up looking at new merchandise. We just got Adidas stuff in," she said.

On Monday afternoon the buzz went away and excitement turned into disappointment after the Mountain West Conference announcement.

This decision deals another blow to the store.

The pandemic had already changed how people shopped there and Fresno State moving to virtual learning meant less foot traffic.

"It's is going to be hard. It is kind of like a retailer anywhere else, their Christmas season being shut down," said Bassham.

Their sales have dipped at least 80% since March.

They were hopeful the football season would help make up some of those losses.

"We definitely depend on all of our students at Fresno State including all the fans, so it greatly affects us," said bartender Alex Salgado.

As officials discuss the possibility of moving the season to spring, Bassham is optimistic they will survive this latest challenge.