House Speaker Nancy Pelosi landed in Taipei, marking a significant show of support for Taiwan despite China's threats of retaliation over the visit.

TAIWAN -- US House Speaker Nancy Pelosi landed in Taipei on Tuesday, marking a significant show of support for Taiwan despite China's threats of retaliation over the visit.

Pelosi's stop in Taipei is the first time that a US House speaker has visited Taiwan in 25 years. Her trip comes at a low point in US-China relations and despite warnings from the Biden administration against a stop in Taiwan.

Pelosi and the congressional delegation that accompanied her said in a statement on Tuesday that the visit "honors America's unwavering commitment to supporting Taiwan's vibrant democracy."

"Our discussions with Taiwan leadership will focus on reaffirming our support for our partner and on promoting our shared interests, including advancing a free and open Indo-Pacific region," the statement said. "America's solidarity with the 23 million people of Taiwan is more important today than ever, as the world faces a choice between autocracy and democracy."

China responded by announcing military exercises and with bellicose rhetoric warning that the speaker's visit "has a severe impact on the political foundation of China-U.S. relations, and seriously infringes upon China's sovereignty and territorial integrity."

"It gravely undermines peace and stability across the Taiwan Strait, and sends a seriously wrong signal to the separatist forces for 'Taiwan independence,' " China's Ministry of Foreign Affairs said in a statement. "China firmly opposes and sternly condemns this, and has made serious démarche and strong protest to the United States."

China's military said it was on "high alert" and would conduct exercises around Taiwan in response to Pelosi's trip, saying in statements it was launching a series "targeted military operations to counteract the situation."

Taiwan's Ministry of National Defense said that 21 Chinese warplanes made incursions into its air defense identification zone (ADIZ) on Tuesday. In response, the Taiwanese military issued radio warnings and deployed air defense missile systems to monitor the activities, it added.

China frequently sends warplanes into Taiwan's self-declared ADIZ. The highest number of incursions ever recorded was on October 4 last year, when 56 military planes flew into the area on the same day. An ADIZ is unilaterally imposed and distinct from sovereign airspace, which is defined under international law as extending 12 nautical miles from a territory's shoreline.

Xie accused Pelosi of "deliberately provoking and playing with fire against people's will," saying her visit is "extremely egregious" and the consequences will be "extremely serious."

"Anyone who attempts to manipulate the Taiwan issue to gain political gain ... will eventually be nailed to the pillar of shame in history," Xie said, according to the state media report.

Taiwan's foreign ministry welcomed Pelosi on Tuesday evening. "It is believed that the visit of Speaker Pelosi and other heavyweight members of Congress will strengthen the close and friendly relationship between Taiwan and the United States and further deepen cooperation between the two sides in various fields globally," the ministry said in a statement.

Taipei Mayor Ko Wen-je also embraced Pelosi's visit but cautioned that the self-governing island should avoid being put "between a rock and hard place" in US-China relations.

"Taiwan should keep its own agency. We are friends with the US and Japan, and we don't have to be on bad terms with China," Ko said in a statement. "Taiwan is in between the US and China. We should keep an open communication channel with China and the US to effectively avoid crises."

Pelosi is expected to depart Taiwan later on Wednesday, according to a news release issued by the foreign ministry. The official was not authorized to speak about Pelosi's travel plans that have not been publicized.

Pelosi wrote an op-ed that published in The Washington Post after she landed Tuesday, arguing that her trip demonstrated the US commitment to Taiwan under threat from China. "In the face of the Chinese Communist Party's accelerating aggression, our congressional delegation's visit should be seen as an unequivocal statement that America stands with Taiwan, our democratic partner, as it defends itself and its freedom," the California Democrat wrote.

Pelosi's stop in Taiwan was not listed on the itinerary of her congressional visit to Asia, but the stop had been discussed for weeks in the lead up to her trip. The potential stop prompted warnings from China as well as the Biden administration, which has briefed the speaker about the risks of visiting the democratic, self-governing island, which China claims as part of its territory.

The White House said Tuesday that Pelosi's trip was consistent with US policy on Taiwan, and that the US would be watching China's actions closely after Pelosi leaves.

"Obviously, we're going to be watching this closely. There is no reason for this visit to become a spurring event for a crisis or a conflict or for a pretext that the Chinese might try to whip up for some sort of military action," National Security Council coordinator for strategic communications John Kirby said on CNN's "At this Hour with Kate Bolduan" on Tuesday.

"Of course, we're concerned about that, which is why part and parcel of her trip is to reaffirm the United States commitment under the Taiwan Relations Act to help Taiwan with its self-defense," Kirby added. "Again, there's no reason for this to erupt in to conflict. There's no change to our policy. This is absolutely consistent with it. And we're just going to watch as things unfold."

A group of more than two dozen Senate Republicans, including Senate GOP Leader Mitch McConnell, issued a statement supporting Pelosi's congressional delegation, which was all Democrats, landing in Taiwan.

"We support Speaker of the House of Representatives Nancy Pelosi's trip to Taiwan," the Republicans said. "For decades, members of the United States Congress, including previous Speakers of the House, have travelled to Taiwan. This travel is consistent with the United States' One China policy to which we are committed. We are also committed now, more than ever, to all elements of the Taiwan Relations Act."

McConnell praised Pelosi's arrival in Taiwan, saying Tuesday that he believes "she has every right to go."

"It's been unseemly and counterproductive for President Biden and his aides to have publicly sought to deter her from doing so," the Kentucky Republican said. "I welcome the speaker's display of support for Taiwan's democracy, but I hope she returns from Asia more mindful of the military dimensions of the Chinese threat, and more committed to working with Republican to address the changing balance of military power out in the region."

US President Joe Biden said publicly before Pelosi's travel that the US military did not believe it was a good time for Pelosi to visit Taiwan, but he stopped short of telling her directly not to go, two sources previously told CNN.

Biden did not speak to Pelosi before her trip, Kirby said Tuesday.

The issue of Taiwan remains among the most contentious in US-China relations. Biden and his Chinese counterpart, Xi Jinping, discussed it at length during a phone call last week that lasted more than two hours.

Administration officials are concerned that Pelosi's trip comes at a particularly tense moment, as Xi is expected to seek an unprecedented third term at the upcoming Chinese Communist Party congress. Chinese party officials are expected to begin laying the groundwork for that conference in the coming weeks, putting pressure on the leadership in Beijing to show strength.

While Biden has not endorsed Pelosi's visit, US officials believe Chinese leadership may be conflating the House speaker's trip with an official administration visit, and they're concerned that China doesn't separate Pelosi from Biden, much, if at all, since both are Democrats.

Pelosi has long been a China hawk in Congress. She's previously met with pro-democracy dissidents and the Dalai Lama -- the exiled Tibetan spiritual leader who remains a thorn in the side of the Chinese government. She also helped display a black-and-white banner in Beijing's Tiananmen Square two years after the 1989 massacre, and in recent years she's voiced support for the pro-democracy protests in Hong Kong.

Speaker Nancy Pelosi and Members of a Congressional Delegation issued this statement that ABC News has retrieved upon arrival in Taiwan. This visit is the first official visit to Taiwan by a Speaker of the United States House of Representatives in 25 years.

"Our visit is part of our broader trip to the Indo-Pacific - including Singapore, Malaysia, South Korea and Japan - focused on mutual security, economic partnership and democratic governance. Our discussions with Taiwan leadership will focus on reaffirming our support for our partner and on promoting our shared interests, including advancing a free and open Indo-Pacific region. America's solidarity with the 23 million people of Taiwan is more important today than ever, as the world faces a choice between autocracy and democracy.

"Our visit is one of several Congressional delegations to Taiwan - and it in no way contradicts longstanding United States policy, guided by the Taiwan Relations Act of 1979, U.S.-China Joint Communiques and the Six Assurances. The United States continues to oppose unilateral efforts to change the status quo."

This story is breaking and will be updated. 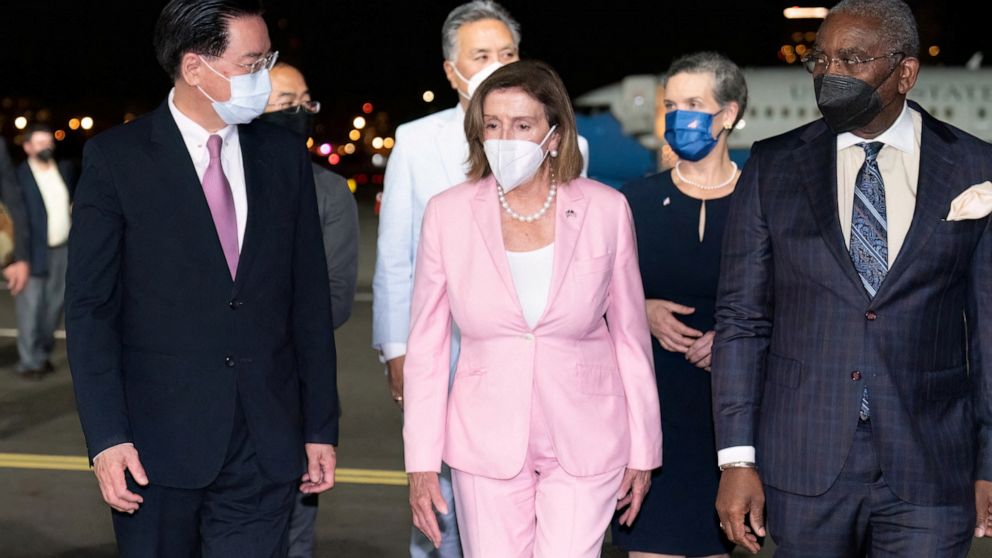 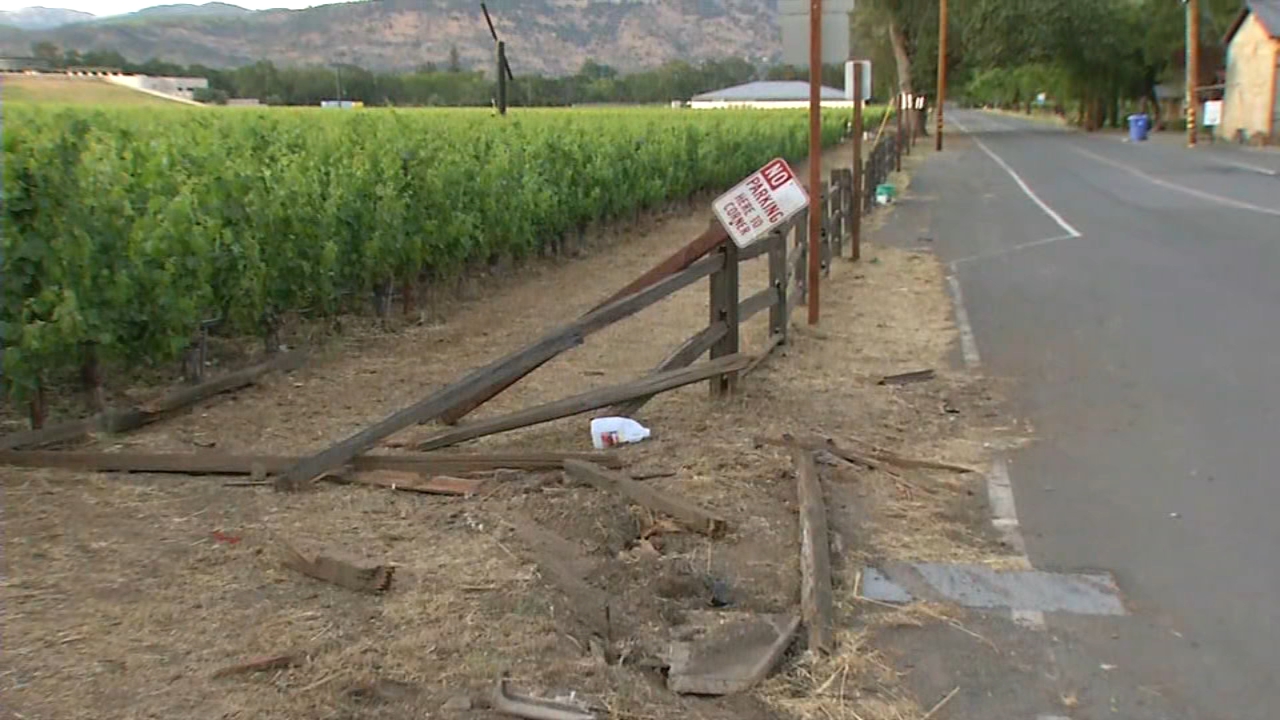 Nancy Pelosi's husband in car crash in Napa prior to DUI: CHP