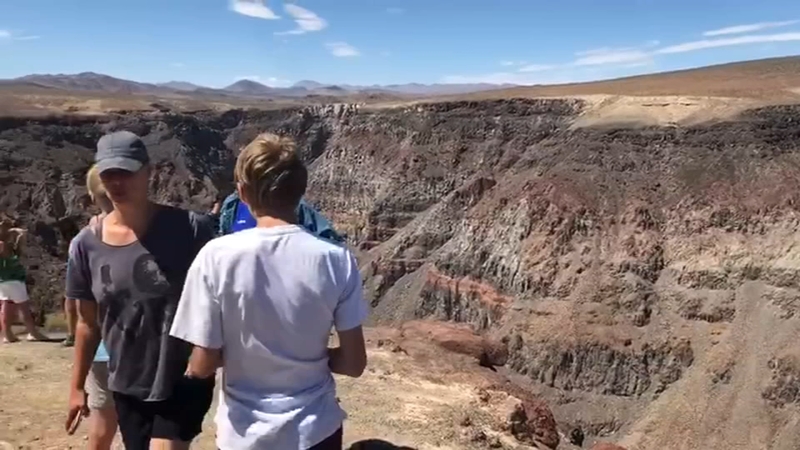 FRESNO, Calif. (KFSN) -- Time is everything in the search for a missing Navy pilot who crashed Wednesday morning.

But the treacherous terrain at Death Valley National Park is making efforts to find the aviator challenging.

The fighter jet took off with another aircraft from Lemoore Naval Air Station.

Both pilots were doing a low-level routine training exercise.

At some point, one of the aircraft went down.

Tim Cassell and his son witnessed it.

"His eyes got big and he was like - 'Whoa!' Something just exploded up there."

Cassell says they saw smoke in the shape of a mushroom fill the air and knew that an aircraft crashed into Rainbow Canyon.

Pieces of nearby debris confirmed their suspicion.

They were scattered all over the ground near the dirt road, pieces of shattered carbon fiber, pieces of aluminum. The biggest thing... the size of a dinner plate

Seven tourists from France were injured by some of the shrapnel from the crash.

Most of them suffered minor nicks, cuts, and bruises.

However, one person had serious burns and was taken to Los Angeles for treatment.

Cassell, who survived a plane crash four years ago in the Sierra Nevada, is hoping that outcome will be the same for the pilot.

"My heart goes out to the families. I know the kind of anguish of my family not knowing if I was alive or not."

And those on the NAS Lemoore base are keeping their faith alive too. They say they're looking for an aviator out there, hoping for the best.
Report a correction or typo
Related topics:
lemooreplane crashcrash
Copyright © 2021 KFSN-TV. All Rights Reserved.
PLANE CRASH

3 dead, including child, after plane crashes into car in Fla.