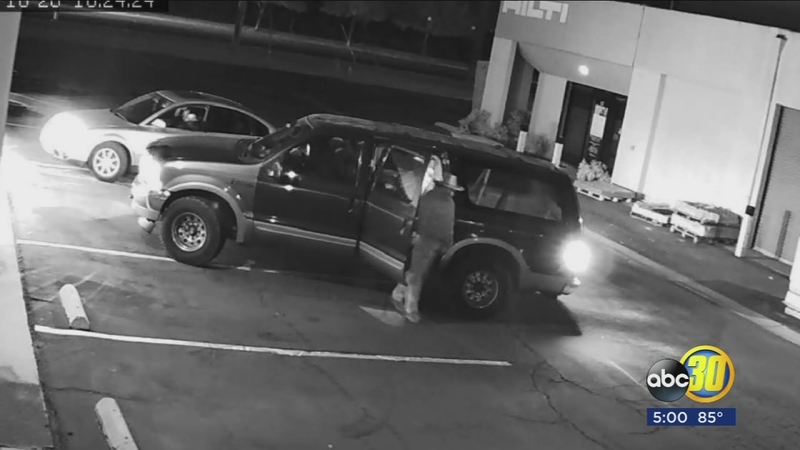 FRESNO, Calif. (KFSN) -- Surveillance video from nearby businesses shows what Fresno Police detectives say are two suspect vehicles in the parking lot near the crime scene. The burglars clipped the lock to open security bars--then pried open the southern facing door at PRK Arms. It is unclear if the guns were left out or put away in a safe.

"That we do not know if they were kept within a safe or they were just kept out on display inside the business and just merely by making entry into the business allowed them access to the firearms," said Lt. Stephen Viveros.

Tuesday officials with alcohol, tobacco and firearms were still collecting serial numbers and gun information at the store. Detectives say approximately 22 to 25 long rifles and 23 to 25 handguns were taken during the heist. Investigators were told cameras inside the business pointed over the gun cases were not working. Detectives are relying solely on video taken from other businesses.

"We do have witnesses that came forward that evening. There are some businesses that are working 24 hours a day and they came forward and assisted us with the investigation."

Investigators wants the public to take a close look at the two toned Ford Excursion used by the suspects and an accomplice car that looks like a Jetta or an Altima.

The most distinguishable trait of one of the suspects is his cowboy hat. The rest of the accomplices wore hoodies.

The value of the stolen guns is still being determined- but police say more concerning is the fact the guns are now in the wrong hands. So far, detectives say it does not appear to be inside job.

"Detectives interviewed every employee, the manager, the business owner separately and their stories were consistent," said Viveros.

The gun store owner, Jeffrey Mullen refused to make any comment about the burglary. Police say he arrived even before officers, just minutes after the security alarm went off.

Mullen is a correctional officer at the Central California Women's Facility in Chowchilla.

The department issued a statement to action news saying quote: "CDCR is looking into information regarding correctional officer Mullen's secondary employment. However, he is fully cooperating with Fresno authorities in this unfortunate incident."