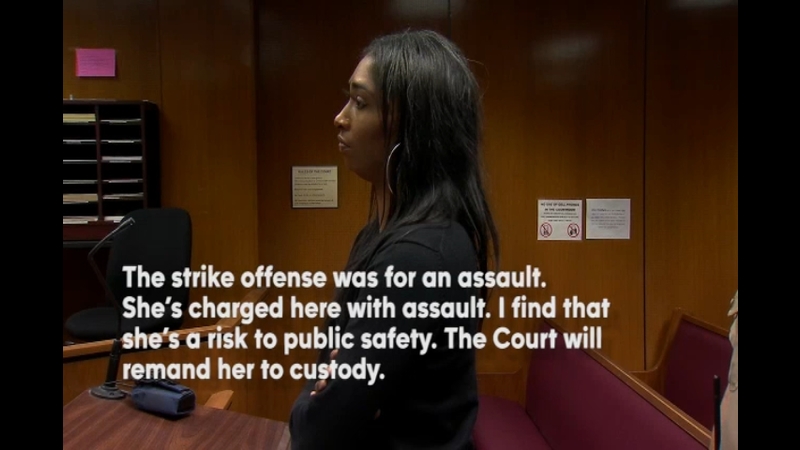 FRESNO, Calif. (KFSN) -- A woman caught on camera fighting a Fresno police officer is back in jail two weeks after the violent incident.

"The defendant, in this case, is lucky that she wasn't shot," says legal analyst Tony Capozzi. "I think it would've been complete justification for the police officer to have defended herself here."

Dontrea Castro did not resist when her background led to a second arrest in court Thursday.

She stands ready to fight the charges against her.

"At this time, Your Honor, we'd like to enter a plea of not guilty with regards to the complaint," said her public defender Roy Park.

The 22-year-old is accused of prostitution and resisting with force when a Fresno police officer tried to arrest her January 7.

Investigators are using cell phone video as evidence, and Capozzi says it's damning.

"Really, based upon the video by itself, it'd be very difficult to come up with any kind of defense in this kind of case," he said. "Again, the defendant, in this case, is lucky she hasn't been wounded, lucky she's still alive."

The officer fired a warning shot near Castro and called for help to get the suspect under control and get her to jail.

Castro posted a $50,000 bond not long after her arrest, but because of her criminal history, the bail should've been even higher.

She already has a conviction from 2015, when she was 18, for assault with a deadly weapon, and prosecutors argued that was some of the evidence she still poses a danger to the community.

"The defendant has a prior strike offense... two violations of probation - one from 2016, one from 2019 - and in addition there's also a pending misdemeanor case (also for prostitution)," said Alison Wilson.

The judge agreed, increased Castro's bail, and had the courtroom sheriff's deputy arrest her.

While Castro's criminal history landed her back in jail, Capozzi says it won't have any bearing on her guilt or innocence.

"But when it comes time for sentencing, if she is indeed convicted, that'll be a big factor in this case -- the fact that she's had prior prostitution convictions, prior assaults, and now this assault," he said.

She's due back in court next week.

Fresno police say, by then the officer she attacked will be back to work after spending time in a hospital and then recovering at home.
Report a correction or typo
Related topics:
fresnoarrestprostitutionfresno police department
Copyright © 2021 KFSN-TV. All Rights Reserved.
More Videos
From CNN Newsource affiliates
TOP STORIES