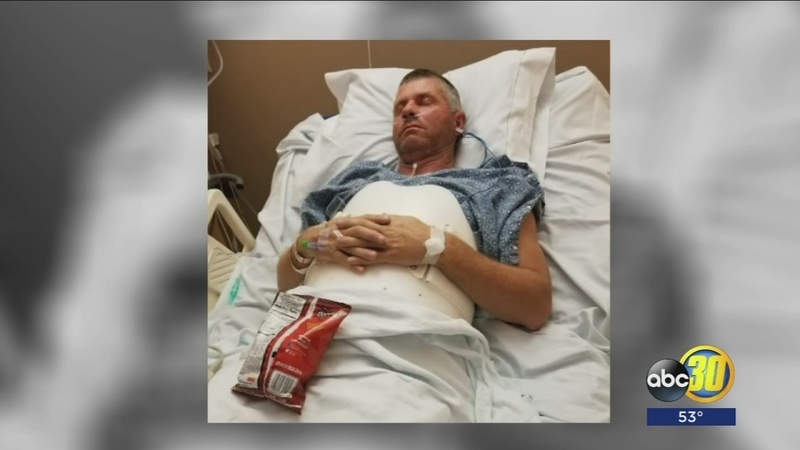 FRESNO, Calif. (KFSN) -- Cellphone video shows the fun a group of friends from Fresno had in Pismo Beach for New Years.

The excitement took a turn for the worst when two of them took a last-minute joy ride on an ATV before leaving.

"We were sitting at camp and I heard sirens," said Wendy Peters.

Peters heard those sounds while waiting for her boyfriend Robert Bills and his best friend Frankie Winters to return.

"I thought maybe we should go look for them and we kept thinking no he's fine he's fine," said Peters.

After about 15 minutes, one of the campers jumped in a four-wheeler to check on them.

"Five minutes later I got a phone call and it's them they are in a wreck," said Peters.

Video from ABC 30 insider Logan Omalley shows first responders working on Winters.
A helicopter had already taken off with Bills. Both were life-flighted to two separate hospitals and had six-hour surgeries to compress their spines.

"Roberts injuries were a little worse off and there is some irreparable nerve damage and they are both paralyzed," said Peters.

Two lives changed within an instant at the start of 2018.

"My heart is breaking for him. I don't even know all I know is it's just moment to moment one day at a time and we'll get through it," said Peters.

Peters says they have the support of loved ones and each other to overcome the challenges.

Bills and Winters both live together and will have to move into a single story home that is wheelchair accessible.

We also just learned from Bills' girlfriend that doctors say his nerves are severed, leaving him with very little to no chance at all to walk.

Winters she says has very little feeling in his leg and a slim chance of walking again.