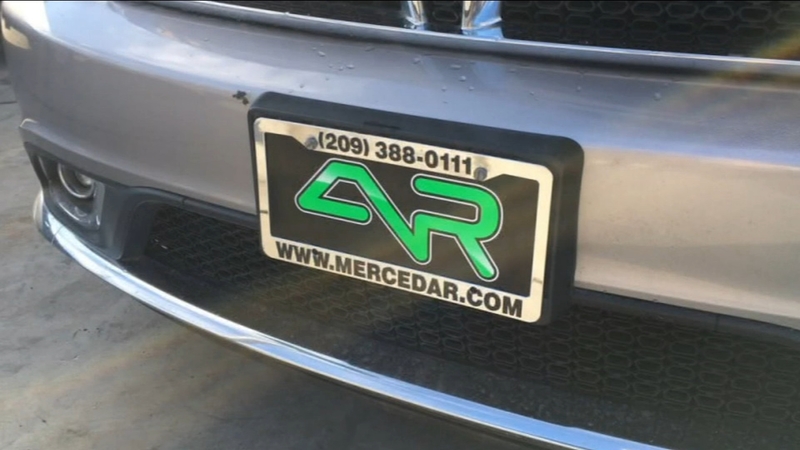 Truck of shooting suspect was sold earlier this year in Merced

The slain corporal started his law enforcement career in Merced, and the vehicle the man suspected of killing him was driving was sold in town, and the folks who made the deal remember the buyer.

Highway signs all over the state asked drivers to call 9-1-1 if they saw the suspect's vehicle.

The grey Dodge pickup with a paper dealer tag for a license plate that said AR Sales was found Wednesday afternoon.

The car dealer is in Merced, and investigators from the District Attorney's office have searched their records.

"They came in this morning about 9:30 a.m. we gave them the documents we had, tried to help out as much as we can," said Jameel Taha, owner of AR Sales.

Taha told Action News since it was a cash deal there weren't a lot of records.

The suspect’s truck was towed away just moments ago. There was some sort of tarp or sheet along the left side of the car. Investigators also have left the scene. @ABC30 pic.twitter.com/y8XkohAMPw

But salesman Adam Nasser saw the surveillance picture and recognized the suspect as being the brother of the man who bought the truck and said he who accompanied him to the car lot.

"They both came in, to purchase the truck, normal family, normal sale, came in with their kids. Just normal sale, like every day," Nasser said.

The dealership gave the name and address to law enforcement.

Corporal Ronil Singh had been on the Newman Police force for seven years. His first job in law enforcement was as a reserve deputy on the Merced County Sheriff's Department.

"He started off his career here in 2010 as a reserve deputy sheriff, and apparently his heart and soul was in the community of Newman, and left here to become a full-time peace officer with them. That's how he got his start," said Sheriff Vern Warnke.

Sheriff Warnke didn't know Singh but feels the loss of a fellow officer.

"Tragedy, there's just no other words to explain this, we are doing what we can but as a law enforcement community, this it's just tragic.