1 dead, 1 outstanding after deputy-involved shooting and standoff near Millerton Lake

KFSN
By Sontaya Rose
MADERA COUNTY, Calif. (KFSN) -- The Madera County Sheriff's Office is investigating a shooting involving a Fresno County sheriff's deputy that left one person dead. It happened around 4 a.m. Thursday north of Millerton Lake. The deputy-involved shooting turned into a SWAT standoff after the suspects ran to a house.

Fresno County Sheriff Margaret Mims said members of the HEAT team were conducting surveillance of a stolen truck and followed the vehicle from the Fresno area to the area near Road 216 and Road 210. Investigators say the two suspects -- a man and woman -- jumped out of the truck and ran to a home that they were familiar with. "The suspects realized that they were being followed. They parked and ran from the location here in Madera County," said Mims.

Mims said law enforcement surrounded the house and established communication with a male resident, who was not the suspect, for about an hour. A while later, deputies saw the resident in the window with a rifle. The man became hostile and pointed the rifle at law enforcement, and a Fresno County deputy fired two shots at the man and killed him, authorities said.

Madera County Sheriff Jay Varney said his SWAT team entered the home and found it empty. Varney said the outstanding suspect was last seen on foot heading toward Millerton Lake. They are still looking for that person. He is described as being white, in his mid-20s, 6 feet tall with blond hair and several tattoos. He may be wearing a black tank top, beige or blue shorts and have a cut on his forehead.

The identity of the man who was killed has not been released. Investigators with the Fresno County Sheriff's Office said they are still trying to determine if there is a relationship between the deceased gunman and the auto theft suspect.

The deputy involved in the shooting was not injured and is now on paid administrative leave. 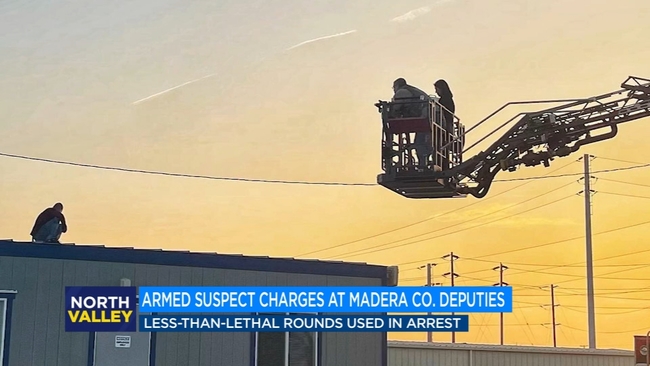