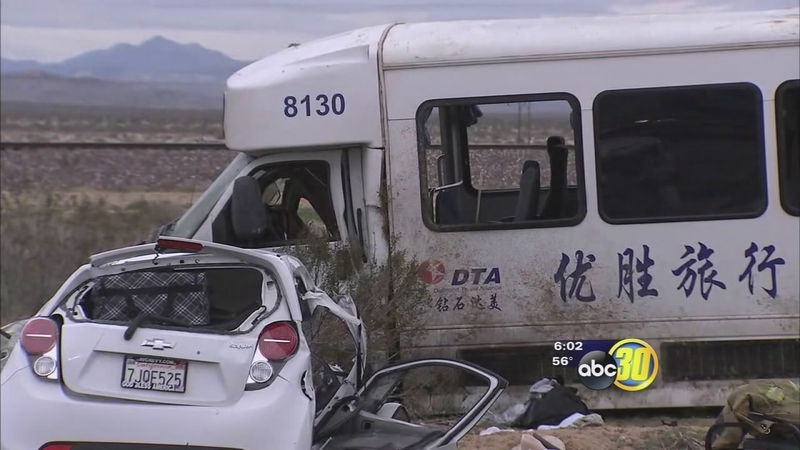 KRAMER, Calif. -- A charter bus was traveling through the Southern California high desert from Fresno to Las Vegas when it crossed into oncoming traffic and ran into two cars, leaving one woman dead and injuring 26 people, authorities said.

Investigators were trying to learn why the tour bus crossed into the westbound lanes of State Route 58 near Kramer, about 100 miles northeast of Los Angeles, California Highway Patrol Officer Brian Benson said.

The woman killed was 55 years old and was in one of the two cars the bus hit, Benson said.

Nine people suffered life-threatening injuries in Monday afternoon's crash, and 17 others were taken to hospitals with injuries that weren't considered to be life-threatening, said Eric Sherwin, a San Bernardino County Fire spokesman.

Duane DeBruyne, a spokesman for the Federal Motor Carrier Safety Administration, said the agency would assist in a post-crash assessment, including an examination of both the vehicle and the bus company's safety record.

Video footage at the scene posted online shows debris strewn all over the side of the highway as firefighters worked to remove the victims from the cars. The footage also shows firefighters placing a woman in a neck brace and carrying another on a stretcher, a woman comforting a puppy, and a man holding a child. The front end of the bus was badly damaged.