With visit, Obama aims to push acrimony with Cuba into past 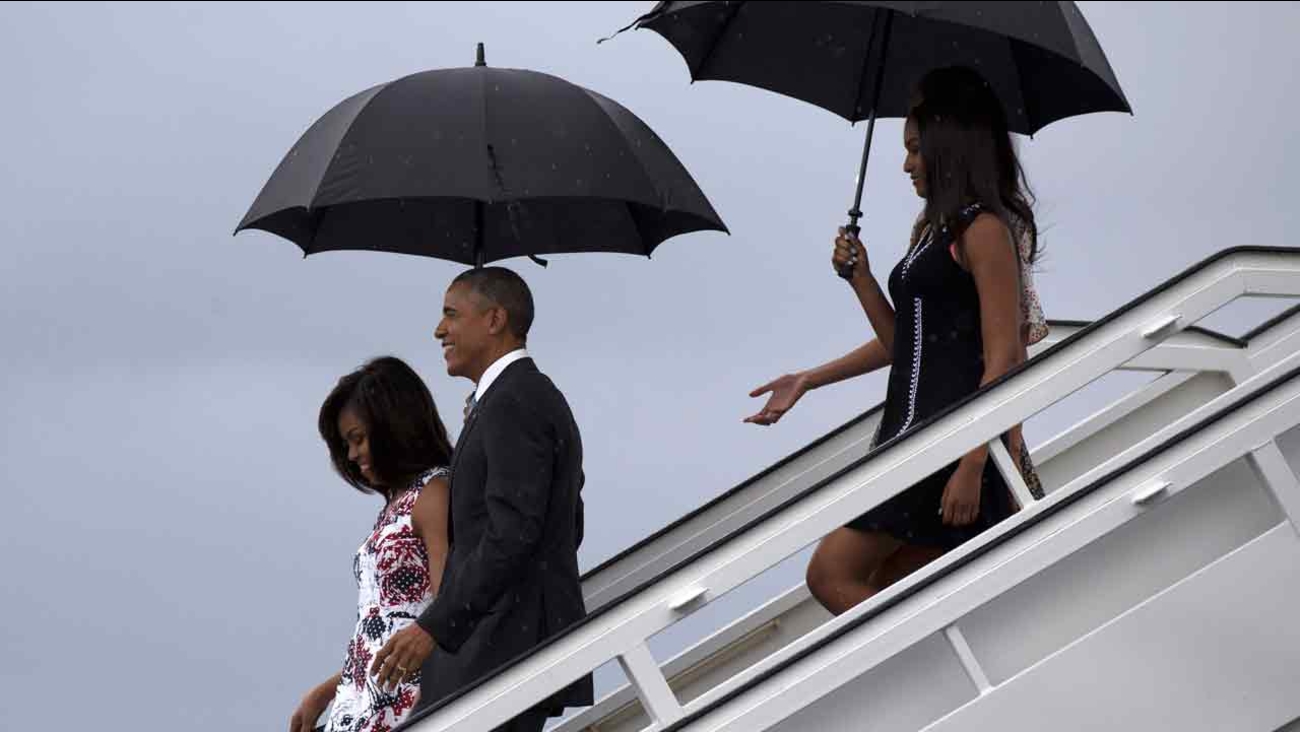 Obama arrives with first lady Michelle Obama, left, and their daughters Sasha, front right, and Malia, as they exit Air Force One at the airport in Havana, Cuba, March 20, 2016. (Ismael Francisco)

HAVANA -- Stepping into history, President Barack Obama opened an extraordinary visit to Cuba on Sunday, eager to push decades of acrimony deeper into the past and forge irreversible ties with America's former adversary.

Obama's whirlwind trip is a crowning moment in his and Cuban President Raul Castro's ambitious effort to restore normal relations between their countries. While deep differences persist, the economic and political relationship has changed rapidly in the 15 months since the leaders vowed a new beginning.

Wielding an umbrella on a rainy Havana afternoon, the president stepped off of Air Force One and was greeted by top Cuban officials, including Cuba's foreign minister and U.S. ambassador. He was joined by first lady Michelle Obama and daughters Malia and Sasha, with dozens of U.S. lawmakers and business leaders arriving separately for Obama's visit.

His first stop was to be the new U.S. Embassy in Havana, which was opened amid great fanfare last year. After greeting embassy staff, Obama and his family were to tour Old Havana by foot, including the Havana Cathedral.

For more than 50 years, Cuba was an unimaginable destination for a U.S. president, as well as most American citizens. The U.S. severed diplomatic relations with Cuba in 1961 after Fidel Castro's revolution sparked fears of communism spreading to the Western Hemisphere. Domestic politics in both countries contributed to the continued estrangement well after the Cold War ended.

The last visit to Cuba by a U.S. president came in 1928, when Calvin Coolidge arrived on the island in a battleship.

"This is an incredible thing," said Carlos Maza, a 48-year-old refrigerator repairman from Havana. He called it "a big step forward."

Obama's visit was highly anticipated in Cuba, where workers furiously cleaned up the streets in Old Havana and gave buildings a fresh coat of paint. American flags were raised alongside the Cuban colors in parts of the capital, an improbable image for those who have lived through a half-century of bitterness between the two countries.

Many Cubans were staying home in order to avoid extensive closures of main boulevards. By early afternoon the Cuban government didn't appear to be calling out crowds of supporters to welcome Obama, as it has with other visiting dignitaries. The city's seaside Malecon promenade was largely deserted Sunday morning except for a few cars, joggers, fishermen and pelicans.

The president's schedule in Cuba is jam-packed, including official meetings with Raul Castro and an event with U.S. and Cuban entrepreneurs. But much of Obama's visit was about appealing directly to the Cuban people and celebrating the island's vibrant culture.

"I don't think that the Cuban people are going to be bewitched by North American culture," Gustavo Machin, Cuba's deputy director of U.S. affairs, told The Associated Press. "We don't fear ties with the United States."

At the Havana Cathedral, Obama was to be greeted by Cardinal Jaime Ortega, who helped facilitate months of secret talks between U.S. and Cuban officials that led to the normalization of diplomatic relations in December 2014.

A highlight of Obama's visit comes Tuesday when he joins Castro and a crowd of baseball-crazed Cubans for a game between the beloved national team and Major League Baseball's Tampa Bay Rays. The president also planned a speech at the Grand Theater of Havana laying out his vision for greater freedoms and more economic opportunity in Cuba. Raul Castro planned to greet him on Monday at the Palace of the Revolution."

Two years after taking power in 2008, Castro launched economic and social reforms that appear slow-moving to many Cubans and foreigners, but are lasting and widespread within Cuban society. The changes have allowed hundreds of thousands of people to work in the private sector and have relaxed limits on cellphones, Internet and Cubans' comfort with discussing their country's problems in public, for example.

The Cuban government has been unyielding, however, on making changes to its single-party political system and to the strict limits on media, public speech, assembly and dissent.

Obama will spend some time talking with Cuban dissidents. The White House said such a meeting was a prerequisite for the visit. But there were no expectations that he would leave Cuba with significant pledges from the government to address Washington's human rights concerns.

Hours before Obama's arrival, counter-protesters and police broke up an anti-government demonstration by the Ladies in White group, with government backers shouting insults and revolutionary slogans. The women were taken into custody by female police officers and loaded onto buses. They're typically detained briefly and then released, a scene that plays out in Havana each Sunday.

A major focus for Obama was pushing his Cuba policy to the point it will be all but impossible for the next president to reverse it.

That includes highlighting new business deals by American companies, including Starwood, which finalized an agreement Saturday to renovate and run three hotels on the island. The Obama administration also gave San Francisco-based online lodging service Airbnb a special license allowing travelers from around the world to book stays in private homes in Cuba.