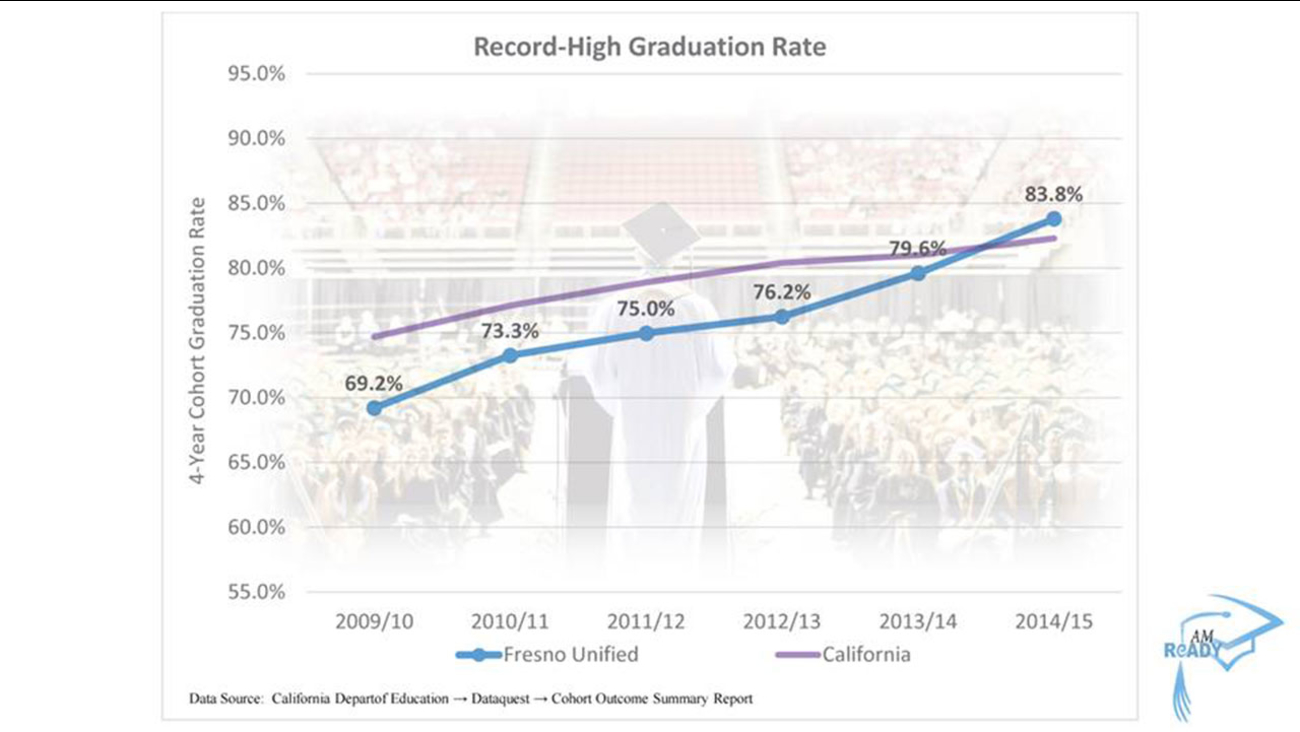 "Fresno Unified School District is continuing efforts to meet the Board of Education's Goal No. 4: 'All students will stay in school on target to graduate,'" said Superintendent Michael Hanson. "We continue our work implementing the Graduation Task Force Report recommendations to drive
our work moving forward.

"While I am encouraged by our continued upward movement in graduation rates, I will not be satisfied, nor should our community, until we reach a 100% graduation rate."

The graduation rate increased for several numerically significant subgroups in 2014-15, including all groups with over 50 students.

The Fresno Unified Board of Education has been relentless in its dedication to improving the graduation rate. The board has focused on making sure students are given an equal opportunity to graduate from high school and have the greatest number of postsecondary choices from the widest array of options.

Efforts in four areas are having the biggest impact on graduation rates:

- The district has added more academic counselors across the district, bringing it to a 320:1 average student-to-counselor ratio -- one the lowest in the state.
- Counselors are accessing data to better monitor individual students' class schedules and make adjustments to make sure they are meeting graduation requirements.
- Summer school has been revamped, making credit recovery a key focus. Students are assigned to attend and requiring parents to opt them out if they are not going to attend.
- Fresno Adult School has expanded its courses so that high school students can take classes they need at night and graduate on time.

"We have worked diligently to ensure that every student -- no matter their economic means, no matter their backgrounds -- graduates successfully on time," Hanson said. "This latest data is a testament to the hard work of our teachers, support staff, leaders, and students, as well as the support of students' families."

The district's 4.5% increase was the second largest graduation rate increase compared to other large school districts that are part of the California Office to Reform Education (CORE) with Fresno Unified. Only San Francisco Unified School District, with a gain of 5%, surpassed Fresno Unified