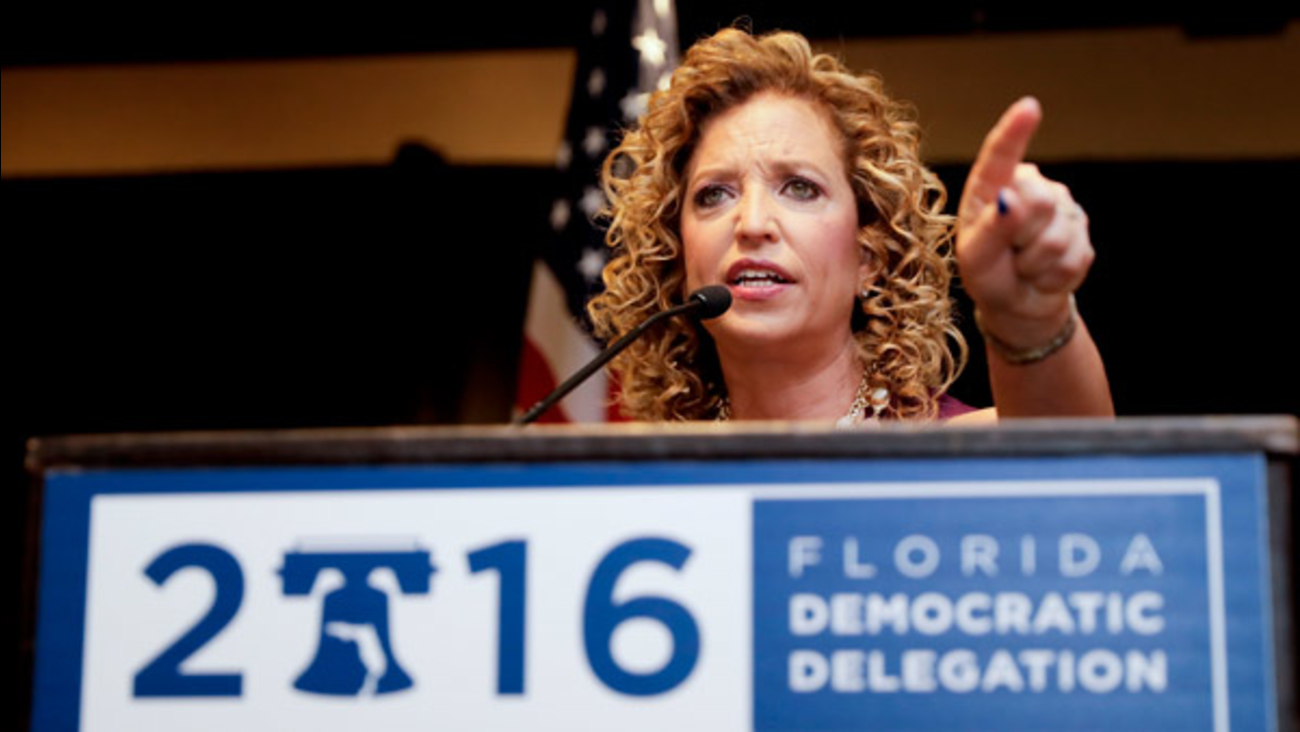 PHILADELPHIA -- Boos and cries of "shame!" were directed towards outgoing party chief Debbie Wasserman Schultz on Monday as the party tried to move past an embarrassing email controversy and heal divisions before this week's national convention begins.

In her first remarks since announcing her resignation on Sunday, the Florida congresswoman struggled to be heard in her Monday morning address before her home-state delegation. Some delegates, apparently disappointed supporters of her primary rival, Bernie Sanders, jeered and waved signs reading "Thanks for the 'help,' Debbie," and more simply, "E-mail."

Her supporters pushed back, standing on chairs and yelling at the Sanders people to step back or sit down.

Wasserman Schultz tried to shout over the raucous crowd, saying, "We have to make sure that we move together in a unified way!"

The scene was a troubling display of tumult for Democrats who awoke Monday to a firestorm over hacked party emails. The correspondence appeared to show top officials at the supposedly neutral Democratic National Committee favoring Hillary Clinton in the presidential primaries against Sanders.

The embarrassing emails, posted by wikileaks over the weekend, have ripped open the primary wounds and exposed a rift that threatens to undermine Democrats' attempt to display four days of focus on putting Clinton in the White House.

The party announced Monday it would kick off its convention with speeches from some of its most popular figures. Massachusetts Sen. Elizabeth Warren, a progressive favorite, would deliver the convention keynote. Sanders and first lady Michelle Obama will also take the stage.

The kickoff lineup had long been intended to appeal to the party's restive liberal wing, but that task has become unexpectedly urgent by the trove of 19,000 leaked emails.

Clinton campaign officials pointed the finger for the hack at Russian military intelligence agencies. They accused Russia of trying to meddle in the U.S. election and favoring GOP nominee Donald Trump.

"We don't have information right now about that, but what we have is a kind of bromance going on between Vladimir Putin and Trump which is distinct from this leak," Clinton adviser John Podesta said in an MSNBC interview.

Trump dismissed the suggestion in a tweet: "The joke in town is that Russia leaked the disastrous DNC emails, which should never have been written (stupid), because Putin likes me."

Republicans relished Democrats' pre-convention tumult, just days after they bumped and bumbled through their convention, unsuccessfully trying to paper over their own division. Trump declared on Twitter: "The Dems Convention is cracking up."

Resistance to Clinton was on display during a demonstration Sunday as many thronged to a main thoroughfare and chanted, "Hell no, DNC, we won't vote for Hillary." Still many delegates, and Sanders himself, said they planned to fall in line, mindful of the Republican alternative.

Ohio's Michael Skindell, a Sanders delegate, said Monday he plans to "strongly support the nominee of the party."

DNC Vice Chair Donna Brazile, a veteran Democratic strategist who will lead the party on an interim basis after the convention, warned more leaked emails, and more apologies, could be coming.

For now, party leaders tried to make Wasserman Schultz's exit as graceful as possible. Clinton and President Barack Obama both quickly praised the departed party chief. Virginia Gov. Terry McAuliffe told delegates Monday morning he hoped delegates will treat the often-controversial Wasserman Schultz with respect as she continues to participate in the convention, noting that "she wants to get up there."

At the Republican convention, Trump cast himself as the law-and-order candidate in a nation suffering under crime and hobbled by immigration, sticking to the gloom-and-doom theme. As he accepted the Republican nomination, Trump said: "The legacy of Hillary Clinton is death, destruction, terrorism and weakness."

In return, Clinton seized upon what she called the "fear and the anger and the resentment" from Trump and Republicans, dismissing Trump's declaration that only he could fix the problems that afflict the nation.

Clinton was due to campaign in Charlotte, North Carolina, on Monday. Ahead of her speech to the VFW, she secured the endorsement of retired Gen. John Allen, former deputy commander of U. S. Central Command and a former commander of the International Security Assistance Force, overseeing NATO troops in Afghanistan

"I have no doubt that she is the leader we need at this time to keep our country safe, and I trust her with that most sacred responsibility of commander in chief," he said.

Clinton is within just days of her long-held ambition to become the party's official presidential nominee. She will formally accept the nomination on Thursday. Obama will speak on Wednesday night. Other high-profile speakers include former President Bill Clinton and Vice President Joe Biden.

Overcoming the lingering resentment among Sanders supporters may become the task of the week.

Kenny Madden, a Sanders delegate from Kentucky, said he doesn't "think there can be anything Bernie can say that will bring people together. I think that's going to have to come from the other side."