Trump to make quick trip to Mexico before immigration speech 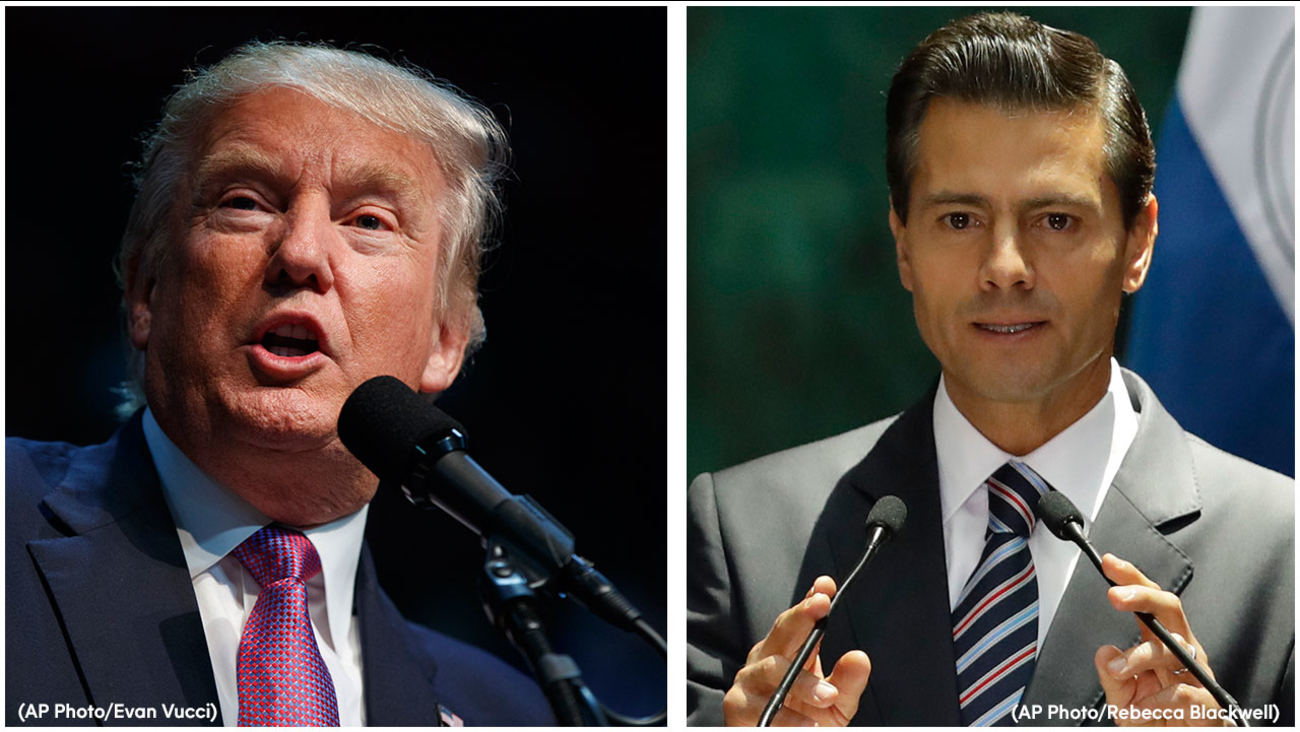 Donald Trump will travel to Mexico on Wednesday to meet with President Enrique Pena Nieto, just hours before the Republican delivers a highly anticipated speech on immigration.

EVERETT, Wash. -- In a surprise move, Donald Trump will travel to Mexico on Wednesday to meet with President Enrique Pena Nieto, just hours before the Republican delivers a highly anticipated speech on immigration.

Trump took to Twitter on Tuesday night to say he looks "very much forward" to meeting with the Mexican leader. Pena Nieto's office confirmed the meeting with its own tweet, saying the two men would meet privately.

The unexpected trip comes as Trump seeks to clarify his stand on illegal immigration, a contentious issue that has been a centerpiece of his Republican presidential campaign. Trump has long called for deporting people currently living in the U.S. illegally and building a wall along the country's border with Mexico.

But in meetings recently with Hispanic supporters, Trump has suggested he could be open to changing the hardline approach he outlined during the GOP primaries. After one such roundtable this month, his new campaign manager said Trump's stance on deportations was "to be determined."

In the days since, Trump and his staff have broadcast varied and conflicting messages, with Trump himself saying one day he might be open to "softening" his stance, and days later saying he might, in fact, be "hardening."

Pena Nieto has been sharply critical of Trump's original immigration policy, particularly the Republican's insistence that Mexico would pay for the border wall. In a March interview, Pena Nieto said that "there is no scenario" under which Mexico would do so.

In the same interview, Pena Nieto compared Trump's language to that of dictators Adolf Hitler and Benito Mussolini, saying it had hurt U.S.-Mexico relations. Former Mexican Presidents Vicente Fox and Felipe Calderon have also alluded to Hitler in describing Trump.

New Jersey Gov. Chris Christie, a close Trump adviser, has been among those pushing Trump to make the trip to Mexico, according to a person familiar with their conversations who spoke on the condition of anonymity in order to discuss them publicly. Christie made his own successful trip to Mexico City in September 2014 and has a warm relationship with the Mexican president.

The New Yorker didn't mention the trip and didn't spend much time discussing illegal immigration during an evening rally outside Seattle, although he teased his scheduled speech on immigration that's set for Wednesday evening in Phoenix.

Trump's short stop in Mexico would mark his second visit to a foreign country during his campaign. Earlier this summer, Trump traveled to Scotland to attend the re-opening of one of his golf resorts, but notably didn't meet with any U.K. political leaders while there.

The Republican has faced a torrent of criticism from Clinton, a former secretary of state, about his preparedness to lead on the world stage. Several Republican foreign policy experts have also warned that Trump is unprepared for the numerous international issues that land on a president's desk.

Clinton's campaign has urged voters to not "be fooled" by what it calls Trump's attempts to disguise his immigration policies.

"Donald Trump will be who he has always been: Donald Trump," the campaign said in an email Tuesday night.