Now, the Jamaica Estates house is going on the auction block Wednesday evening with an opening bid of $849,000.

Trump lived in the home - built in 1940 by his developer father - until he was 4 years old, when the family moved to another house in the same community, also built by his dad.

A slate path leads up to the brick-and-stucco home that has five bedrooms, 4 baths, an enclosed rear porch and a detached, 2-car garage. Today, the 3,600-square-foot house also features a finished basement with a second kitchen.

Jamaica Estates, located in Queens - the city's most diverse borough - is an upper middle class enclave of one-family Tudor, Victorian and Colonial style homes. It was developed at the turn of the 20th century as an affluent community with hilly and winding streets with names like Aberdeen and Avon that boasted easy access to midtown Manhattan.

It was nearly all-white in Trump's boyhood days, but today it's a community that includes "all backgrounds and ethnicities," said Misha Haghani, co-founder of Paramount Realty, which is coordinating the auction with the listing broker, Leffey Real Estate.

The billionaire Republican presidential nominee once recalled in an interview that "parts of Queens were rough" but Jamaica Estates offered "an oasis."

An email request for comment from the Trump Organization was not immediately returned.

Interested bidders at the auction, being held at the Roosevelt Hotel in Manhattan, must arrive with a bank or certified check in the amount of $90,000. Before the auction, they'll have to purchase due diligence information that includes the property's survey and title report.

Over the summer, the house was listed on the market for $1.6 million, and later reduced to $1.39 million.

While there were some offers, the owners decided "to auction it and let buyers tell them what it's worth," said Haghani. "It allows them to control the timeline."

There is an auction reserve but it was not disclosed.

In recent weeks there were about 40 houses on the market in Jamaica Estates with the medium price of $1.7 million, said Haghani.

"It's a perfect house but now it's a little too big for me," said the home's owner, Isaac Kestenberg, who has lived in the house for eight years and is separating from his wife.

"We didn't change anything. It's beautiful," he said in an interview, noting the natural wood trim and carved fireplace. "It's a beautiful neighborhood, nice, quiet, no crime, very manicured. It's like living upstate but being in the city."

Kestenberg said he only learned several weeks after buying the house that the Trumps had occupied it for a time. When the house went on the market in the summer, Trump "did not come over to look at it," he quipped. 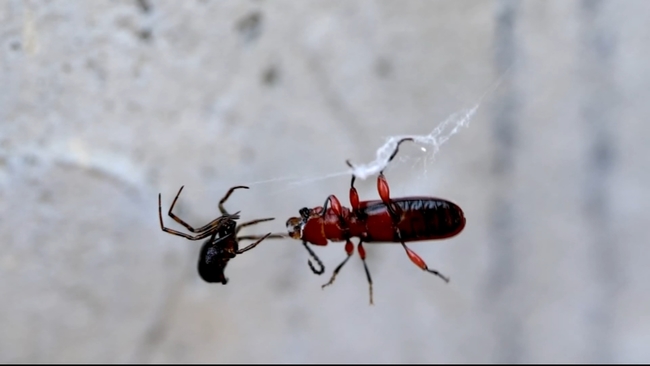 Listen to this: Scientists translate spider webs into music

Tax Day is not April 15 this year, pushed until next month
More Videos
From CNN Newsource affiliates
TOP STORIES