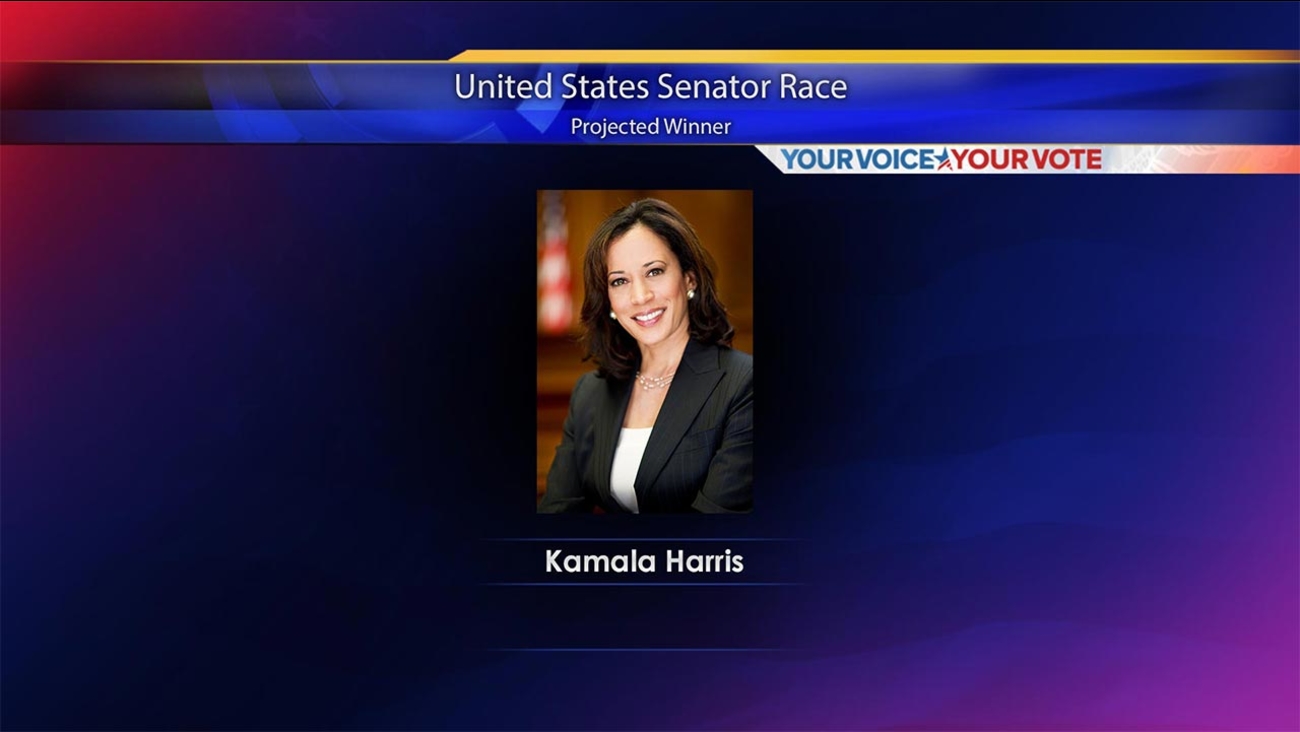 Hillary Clinton also was a big winner in the state, according to the poll, extending to seven the string of Democratic presidential victories in the state that started with her husband in 1992.

Harris had about 65 percent of the first 850,000 votes counted, while Clinton had 59 percent to 36 percent for Republican Donald Trump with 1 million votes tallied.

Their victories came on a watershed night when California voters legalized the recreational use of marijuana and considered whether to end the death penalty, change the way the state negotiates for prescription drugs and whether to extend an income tax hike on the wealthy.

Meantime, Democrats were looking to add to their 39-14 advantage in California's congressional delegation, with Darrell Issa from the San Diego-area 49th District the most prominent GOP target.

In the Senate race, it was the first time since voters started electing senators a century ago that Republicans were absent from California's general election ballot, reaffirming the GOP's fading influence in the state. Democrats control every statewide office and both chambers of the Legislature.

Harris, 52, becomes the first Indian woman elected to the Senate, and the second black woman. Illinois Sen. Carol Moseley Braun was elected in 1992 and served one term. Harris, a lifelong prosecutor, is the daughter of immigrants from India and Jamaica.

The exit poll found Harris with an edge in nearly all demographic groups. The two were about evenly splitting the Hispanic vote, even though Sanchez, the daughter of Mexican immigrants, had made overt appeals for Latino support.

The survey of 2,282 California voters was conducted for AP and the television networks by Edison Research. This includes preliminary results from interviews conducted as voters left a random sample of 30 precincts statewide Tuesday, as well as 744 who voted early or absentee and were interviewed by landline or cellular telephone from Oct. 29 through Nov. 4. Results for the full sample were subject to sampling error of plus or minus 4 percentage points; it is higher for subgroups.

Harris never trailed in polls or fundraising and was the consensus pick of the Democratic establishment. She was endorsed by President Barack Obama, Vice President Joe Biden, Gov. Jerry Brown, Boxer and her soon-to-be Senate colleague from California - Dianne Feinstein.

Harris and Sanchez emerged from a 34-candidate primary in June, in which only the top two vote-getters advanced to November. None of the Republicans managed to break out of single digits in voting.

Their rivalry revolved around who was best suited for the job - a veteran prosecutor with liberal credentials who touted her experience fighting big banks and environmental criminals, or a 10-term member of the House who positioned herself as a moderate, with experience in national security and military affairs.

The Senate contest marks a generational and demographic shift in the state that is growing increasingly diverse in population and favorable for Democrats.

Boxer, who is white and turns 76 this week, will be replaced by a Baby Boomer.