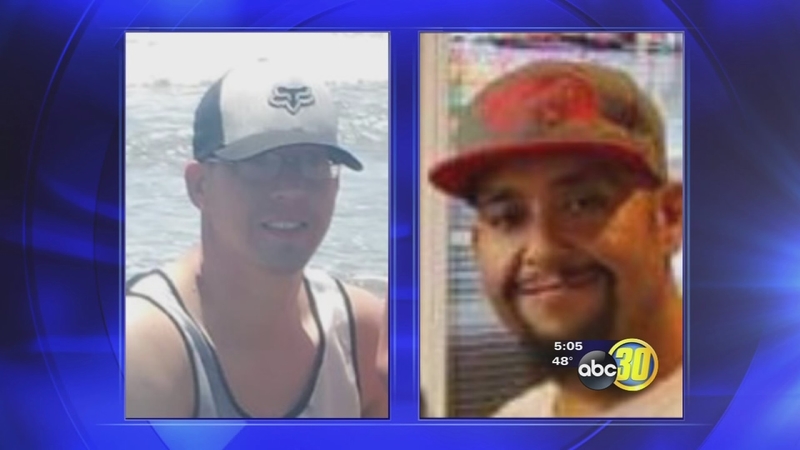 SELMA, Calif. (KFSN) -- Two mechanics who were on their way back from picking up a car part in Selma died in a drunk driving crash in Fresno County.

The men killed were 30-year-old Tony Reyes along with his longtime friend 36-year-old Greg Cantu. Both men are from Parlier.

The man who caused the accident, 75-year-old Lewis Burris, has major injuries and is still in the hospital. CHP officers said he was driving drunk, and court records show this is not his first DUI offense.

Cantu's pick up truck is still in the driveway at Tony Reyes' house. The two were running errands Monday and fixing cars when investigators say an elderly man behind the wheel of an F-250 pickup never stopped at the flashing stop sign at Rose and Academy. Officers said he was also under the influence at the time.

Reyes and Cantu were hit and the red pickup they were in burst into flames. "We're not going to sugar coat it-- it upsets us. That's how life is sometimes, it's not fair. It wasn't really his time, but that's what happened," said Octavio Colunga, Reyes's brother-in-law.

Flowers, charred pavement, and collision diagrams mark the deadly intersection where two lifelong friends met their end. Pete Cano saw his nephew just a few hours before he died at Cantu's mom's house. "He told her to make some tacos for him and his friend that got killed. So she made four tacos," said Pete Cano, Cantu's Uncle.

Cano's last memory is Cantu thanking his mom for lunch and kissing her goodbye.

Cantu was recently given a renewed sense of confidence after having gastric bypass surgery last year that left him more than a hundred pounds lighter and able to be more active and pursue his hobby as a mechanic. "He was real happy he lost some weight and he used to say 'well, now I can get underneath the cars and work on them,'"said Cano.

Reyes was already a well-known auto repairman, so the two made a great team. Family members said Reyes will always be remembered for his sense of humor. "A jokester, he always likes to joke around and has his country music playing all the time, had neighbors over. When he was helping them out with their cars, they were always chit chatting," said Colunga.

The tragedy has left both families dreading the Christmas season, that will now always come with a painful reminder of the two that are missing. "I don't really care about the holidays right now. It's more that things aren't going to be the same with him not here with us,' said Jorge Colunga, Reyes's brother-in-law.

The suspect has been arrested twice before on DUI charges and was convicted once in 1996. Witnesses also said there were alcohol bottles in his truck Monday.

Once he leaves the hospital, he will be booked into the Fresno County Jail.

Cantu's family has set up a memorial fund at Educational Employees Credit Union. If you would like to contribute the account number and routing number are below. Donations can be made at any EECU branch.