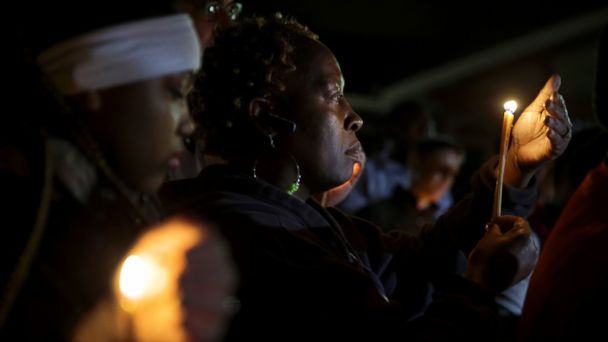 FERGUSON, Mo. -- A manhunt for suspects in the ambush shootings of two police officers in Ferguson, Missouri, continued tonight as demonstrators gathered outside the headquarters of the city's police department for a candlelight vigil.

More than 100 demonstrators gathered, along with media and police presence, but the tone was much different than a night before, when a large crowd gathered following the resignation of the St. Louis suburb's police chief. It was during that gathering that shots rang out and the two officers were injured.

The officers, who have not been identified, were "lucky" they weren't killed, St. Louis County Police Chief Jon Belmar said earlier Thursday. He said they heard "hear three or four shots ring out" before the officers were hurt, both of whom were seriously wounded from a shooter standing about 150 feet away.

"We are lucky by God's grace that we didn't lose two police officers," he said.

Belmar said the shots were fired from an undetermined location north or northwest of the Ferguson Police Department building.

The search for the suspect or suspects is the "number one priority" within the St. Louis County police department, according to Belmar.

U.S. Attorney General Eric Holder, in a statement released this morning, said, "This heinous assault on two brave law enforcement officers was inexcusable and repugnant. I condemn violence against any public safety officials in the strongest terms, and the Department of Justice will never accept any threats or violence directed at those who serve and protect our communities. ... Such senseless acts of violence threaten the very reforms that nonviolent protesters in Ferguson and around the country have been working towards for the past several months."

Holder also said he wished the officers "a full and speedy recovery."

"We stand ready to offer any possible aid to an investigation into this incident, including the department's full range of investigative resources. And we will continue to stand unequivocally against all acts of violence against cops whenever and wherever they occur," he added.

Tensions simmered in the city on Wednesday night after the resignation of the city's police chief, Tom Jackson. Hundreds of protesters gathered throughout the night, staring down police officers in riot gear.

A handful of people were arrested. Some people chanted, and other flare-ups were reported, unrest rekindled after a Justice Department report documented widespread racial bias in the city.

Jackson's resignation makes him the sixth person who has been fired or forced to resign since the report was released March 4 detailing what it described as rampant racial bias in policing in the St. Louis suburb.

Lt. Col. Al Eickhoff will take over as the acting chief of police starting today as the city launches a national search for a new chief of police, the letter stated.

Jackson had initially come under fire in August for his department's handling of the shooting death of unarmed teenager Michael Brown.

"We reject any kind of violence directed toward members of law enforcement. It cannot and will not be tolerated," the family said. "We specifically denounce the actions of stand-alone agitators who unsuccessfully attempt to derail the otherwise peaceful and non-violent movement that has emerged throughout this nation to confront police brutality and to forward the cause of equality under the law for all. We must work together to bring peace to our communities. Our thoughts and prayers remain with the officers injured during this morning's shooting and their families."