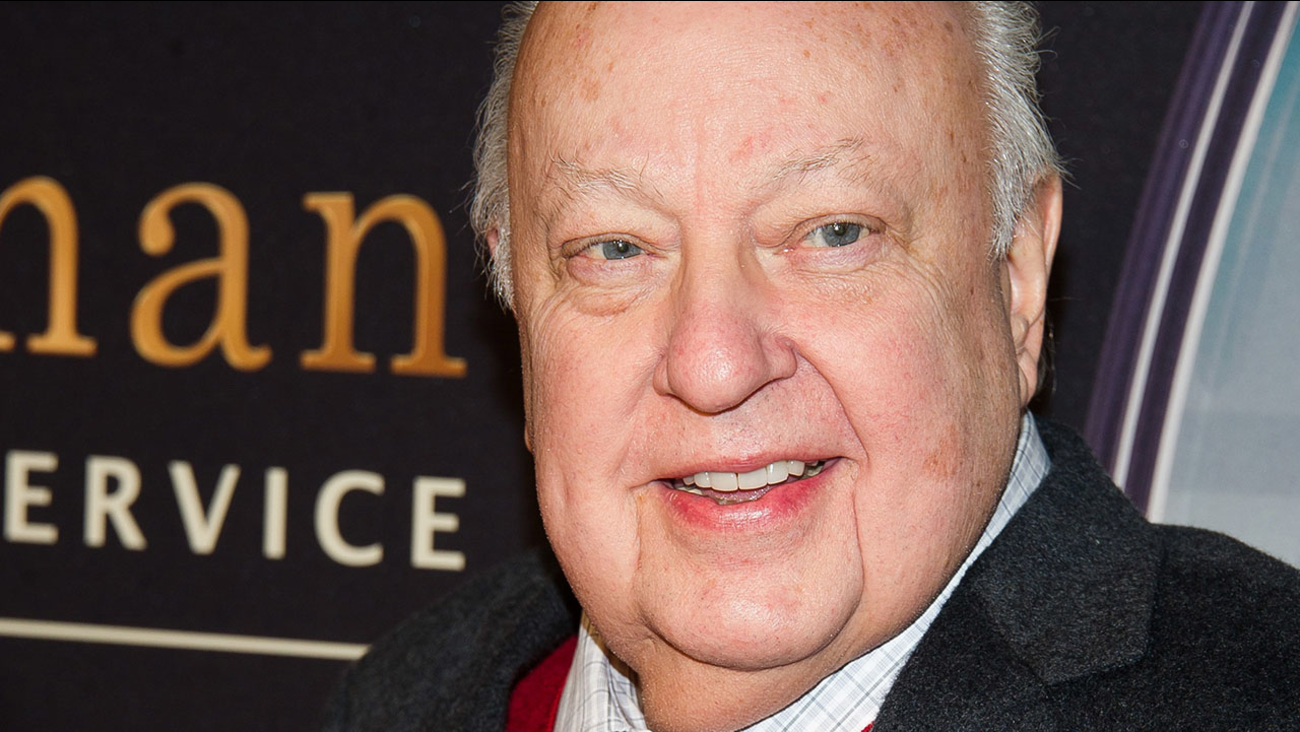 NEW YORK -- Roger Ailes, the communications maestro who transformed television news and America's political conversation by creating and ruling Fox News Channel for two decades before being ousted last year for alleged sexual harassment, died Thursday, according to his wife, Elizabeth Ailes. He was 77.

The cause of death and where Ailes died was not reported.

But according to the Palm Beach (Florida) Police Department, a caller contacted 911 dispatchers on May 10, saying Ailes had fallen in his bathroom, hit his head and was bleeding profusely. He was taken to a hospital by attending paramedics. Whether he had been released from the hospital since then was not immediately clear.

A former GOP operative to candidates including Richard Nixon, Ronald Reagan and George H.W. Bush and a one-time adviser to President Donald Trump, Ailes displayed a mastery of modern messaging early in his career. Then he changed the face of 24-hour news when, in 1996, he accepted a challenge from media titan Rupert Murdoch to build a news network from scratch to compete with CNN and other TV outlets they deemed left-leaning.

That October, Ailes flipped the switch on Fox News Channel, which within a few years became the audience leader in cable news. Ailes branded the network "Fair and Balanced" and declared he had left the political world behind, but conservative viewers found a home and lifted prime-time commentators Bill O'Reilly and Sean Hannity to the top of the news ratings.

"He has dramatically and forever changed the political and the media landscape singlehandedly for the better," Hannity tweeted on Thursday.

"He will be remembered by the many people on both sides of the camera that he discovered, nurtured and promoted," Murdoch said. "Roger and I shared a big idea which he executed in a way no one else could have. In addition, Roger was a great patriot who never ceased fighting for his beliefs."

Others laid the nation's political dysfunction and inability to find common ground at his feet, creating the atmosphere for Trump to succeed.

"It's a very complicated story," said Gabriel Sherman, author of the Ailes biography, "The Loudest Voice in the Room." ''He is in some ways a genius and in some ways tragic. His quest for power consumed him."

But in little more than two weeks, both his legacy and job unraveled following allegations by a former anchor that he had forced her out of Fox News after she spurned his sexual advances. The lawsuit filed on July 6 by Gretchen Carlson quickly triggered accounts from more than 20 women with similar stories of alleged harassment by Ailes either against themselves or someone they knew.

Reportedly, a key witness was Megyn Kelly, the network's superstar personality, whose voice was conspicuously missing in the chorus of women and men at Fox News who spoke up on behalf of Ailes. Their defense did little to staunch the widening scandal. Despite Ailes' staunch denials, 21st Century Fox corporate head Rupert Murdoch and his sons, James and Lachlan, determined that Ailes had to go. The announcement was made on July 21.

The allegations went beyond just Ailes: In April, reports that the network had settled lawsuits with five women who alleged sexual harassment against network star Bill O'Reilly led to his firing. Three other executives also lost their jobs.

Rumors of sexual improprieties at Fox News and by Ailes in particular weren't new. Sherman's 2014 biography reported numerous unflattering anecdotes, including an allegation (denied by Ailes) that he offered one female employee extra money if she would have sex with him.

Before Carlson's bombshell legal action, Fox's roaring success and enormous earnings (with some estimates that it accounted for nearly a quarter of the parent company's profits) insulated Ailes from any suspicion as well as from his past scrapes with the Murdoch sons over who he would report to.

His dismissal was a headspinning downfall and a breathtaking defeat for Ailes, a man who all his life seemed to be spoiling for a fight and was used to winning them.

Ailes was a brawler. And even when he was on the winning side of a battle, he positioned himself as the defiant outsider going toe-to-toe with his bullying nemeses. Brash, heavyset and bombastic, he was renowned for never giving in, for being ever confrontational with a chip on his shoulder and a blistering outburst at the ready.

When he founded Fox News Network, Ailes' stated mission was to correct for the sins of a media universe that was overwhelmingly liberal. Pledging fairness from his employees shortly before the network launched, he was typically tough talking: "Will they hit it every time? Hell, no. Will they try? Hell, yes. Will we be criticized? Hell, yes. Do I care? Hell, no."

As usual, he had defined the enemy (in this case, his media critics and other presumed foes) before they could define themselves. It was his crowning principle.

This attack-dog style served him well when, at 27, Ailes wrangled a job with Nixon, then vying for a political comeback in the 1968 presidential race.

"Mr. Nixon, you need a media adviser," Ailes declared (according to Sherman's biography).

"I am," replied Ailes, having fashioned the job on the spot.

Nixon, whose run for the White House had been dealt a blow eight years earlier in a televised debate against his camera-ready rival John F. Kennedy, was a challenge Ailes eagerly accepted at a moment when, as he realized better than most, TV could make or break a candidate. Concluding that viewers would never warm to Nixon, nor would the media establishment, Ailes struck a winning formula by packaging him in comfortably staged TV town-hall meetings as a man whose intelligence the audience would respect.

The remainder of Ailes' career would draw on various blends of showmanship, ruthless politics and an unmatched skill for recognizing TV's raw communication power before his opponents did, and harnessing it better.

Afflicted with hemophilia, he spent much of his early years housebound in front of, and fascinated with, television, and after graduation from Ohio University landed an entry-level position at a TV station in Cleveland that had just started a local talk and entertainment program starring a has-been former big-band singer named Mike Douglas.

Ailes went to work as a production assistant on "The Mike Douglas Show" and rose in its ranks (at 26, he was named its executive producer) along with its rising fortunes as it went into national syndication and moved to Philadelphia.

It was there in 1967 that he and Nixon crossed paths in a meeting that changed both their lives.

After jumping ship from the "Douglas" show to help steer Nixon to the White House, Ailes spent more than a decade as a communications consultant to corporations and Republican candidates. And as a sign of his versatility, he also became a theater producer, with a hit off-Broadway musical, "The Hot L Baltimore," in the early 1970s, and a network boss, helping start Television News Incorporated, a short-lived right-wing TV service funded by conservative brewing magnate Joseph Coors, that seemed to presage Fox News by a quarter-century.

And in 1988, he orchestrated the media campaign for Vice President George H.W. Bush's presidential bid. It was a campaign widely seen as being no less nasty than it was successful.

One indelibly comic image that led to Bush's victory was a commercial that appropriated footage of opponent Michael Dukakis riding in a military tank looking foolish in a bulbous helmet. Even more explosive anti-Dukakis commercials featured a black felon, Willie Horton. Designed to play on voter fears of Democrats' supposedly soft-on-crime policies, those commercials, while effective, were widely condemned as racist. Ailes denied responsibility for them, though many of his critics were loath to believe him.

Within a few more years, he claimed he had sworn off politics.

In 1993, he joined NBC to run its cable business network, CNBC. He was credited with boosting CNBC's ratings and putting that troubled NBC subsidiary in the black. Meanwhile, he created another network, the talk-and-advice-oriented America's Talking.

"I've gotten over all the cynicism of politics," Ailes told The Associated Press in 1995, although, during that same period, Ailes moonlighted as executive producer of the syndicated TV show that starred right-wing radio sensation Rush Limbaugh.

Then, in January 1996, Ailes resigned from NBC after America's Talking was sacrificed to free up channel capacity for the company's cable-news venture, MSNBC.

Within weeks, Ailes had jumped to what was then known as News Corp., and by fall he launched Fox News Channel against a pair of seemingly indomitable rivals: three-month-old MSNBC, the network with which his former employers replaced his America's Talking channel, and cable-news pioneer CNN.

Even so, by 2002, Fox News had sealed the deal as ratings leader, dominating cable-news competition and tying his rivals in knots in both daytime as well as prime time, where he deployed a murderers' row of hosts led by Bill O'Reilly and Sean Hannity.

Ailes helped make a hot property out of Glenn Beck, and signed a virtual salon of former-and-future GOP big names who found a welcoming platform for party talking points.

Other hires included Gretchen Carlson, who came to Fox News from CBS News in 2005 and was dismissed when her contract expired on June 23, 2016, and Megyn Kelly, an attorney-turned-TV-journalist who joined the network in 2004 and a decade later was arguably the network's biggest marquee name.

From the start, Ailes steadfastly denied any political bias or agenda on the part of his network, whether in its message or its personnel. Politics, schmolitics: "I hired Sarah Palin because she was hot and got ratings," he told The AP in 2011.

Propelled by Ailes' "fair and balanced" branding, Fox News successfully targeted viewers who believed the other cable-news networks, and maybe the media overall, displayed a liberal tilt from which Fox News and Fox Business Channel (which he launched in 2006 against his former business network, CNBC) delivered its audience with unvarnished truth. Thus did he leverage the public's distrust for the media while positioning his networks as the anti-media news-media alternative - and he their upright overlord.

"My first qualification is I didn't go to Columbia Journalism School," he boasted to The New York Times in January 2010, and added, "There are no parties in this town that I want to go to."

Though ratings continued to soar, in later years Ailes' power was challenged. He seemed incapable of stopping Donald Trump's rise as the GOP's top contender for the 2016 election. In an early televised debate, Fox network moderators, notably Kelly, besieged Trump with sharp interrogation about his experience, his policies and past comments about women. But the real estate mogul's candidacy was undamaged as he lobbed insults at Kelly and her network for what he labeled unfair treatment.

By summer 2016, Ailes and Trump had seemingly reached detente, with Fox News climbing on the Trump bandwagon and vice versa. It was ironic, then, that Ailes was ousted only hours before Trump accepted the GOP nomination for which Fox had helped pave the way.

With Ailes' sacking, Rupert Murdoch, the parent company's executive chairman, became interim boss of Fox News and Fox Business Network until a successor could be found. But Ailes had been so identified with the brand since its inception that many, both insiders and audience members, were left hard-pressed to envision Fox News without him.

In the meantime, the network's talent lineup took a hit as Kelly left for NBC News and O'Reilly was fired.

Ailes is survived by his third wife, Elizabeth, who had worked for him at CNBC as vice president of programming, and their son, Zachary.